How His Apostles Died. Fighting HHS is Easy. 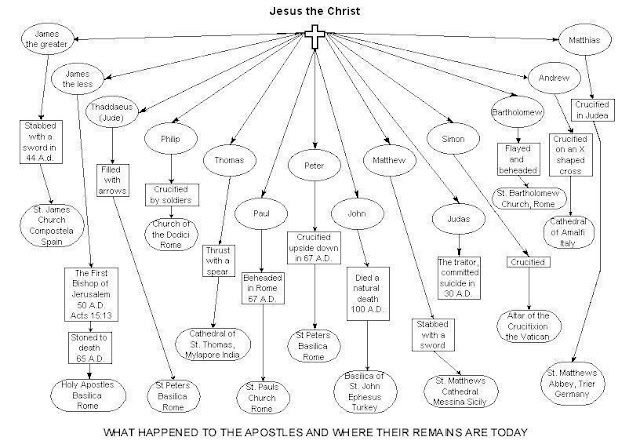 Correction - James the Greater Was Beheaded by Herod..

Agatha was a martyr in the sense that we most often think of martyr - she shed her blood for the faith. However, there are other types of martyrs - who suffered for the faith, but were not killed. To distinguish them as beings witnesses, they are sometimes called martyrs, but of another color.
Agatha is a "red martyr," the "official type." As the bishops of Vatican II said, such a martyr "is conformed to (the Lord) by the shedding of blood" (Lumen Gentium, no 42).

However, there are also "white martyrs," of whom the best known are the desert fathers and the confessors, who gave up everything to live with Christ. They renounced earthly pleasures for those of heaven, although not to the point of suffering physical persecution. This does not mean that they did not suffer, but not at the hands of others to the point of death. White martyrs are, like Agatha, willing to give up everything for the love of God.

Mary Magdalene is sometimes given as an example of a blue martyr. Even though her greatest contribution to the church was her great devotion to Christ, she has also been held up as a model to all those who wish to live a life of repentance.

Green martyrs are those who have given their lives to bringing the Word of God to others. Most often this term is used for Irish missionaries. Thomas Cahill made the term well known through his 1996 book "How the Irish Saved Civilization." (Sometimes green and blue get mixed up in reference to these types of witnesses. There is also a growing tendency to link green martyrs to the ecology movement, but this is a very recent development.)

As Dominican Bishop Anthony Fisher, auxiliary bishop of Sydney, Australia, said earlier this year: "Everyone knew that the front pews in heaven were reserved for the red martyrs, the apostles and those who gave the witness of blood. Behind them were the ‘white martyrs,' the innocents, virgins and monks. And in the third tier, the ‘green martyrs', the missionaries, green because so many were Irish, who went to evangelize..."

Martyrs lived — and died — according to the demands of discipleship. They followed Christ and imitated him, even to offering their lives. They turned to God and received new life through Christ. Whatever color we use wish to refer to them, they are still among the ranks of the blessed "good and faithful servants" of the Lord.

Acts of the Apostles states that James the Greater was beheaded by Herod.

You're so great.
love,
Anna

You're welcome. I learn something so wonderful every day, almost, about our Church.

As a practicing Roman Catholic who reads, studies and prays daily, I have difficulty when I read of individuals or events associated with "Vatican II". Unfortunately, the majority of documents relating to Vatican II could be classified as HERETICAL in nature plus many of the popes and cardinals have been found to be FREEMASONS (pre-Vatican II, this meant automatic excommunication from the Roman Catholic Church). Further, the validity of any Vatican II references must be considered flawed and/or questionable. Whether it be RED. WHITE, BLUE or GREEN, the potential for actual, physical martyrdom in the United States is close at hand! Therefore, PRAY, SACRIFICE, FAST, ATTEND A VALID MASS, SAID BY A VALIDLY ORDAINED PRIEST ON A DAILY BASIS, IF POSSIBLE, plus STAND FIRM and SPEAK OUT against HOMOSEXUALITY, SAME SEX MARRIAGE, ABORTION, CONTRACEPTION and other MORTAL SINS so commonly accepted and practiced in today's CATHOLIC society.

I'm so happy that you're on His side, and are a General in the fight.

Thank you, Carolyn, that was wonderful!!

That's great. I have his book. Irish history is so organic and real. They have been through so much.

Thank you, Carolyn. I hope your health is going in a positive direction,
too.

Keep praying for me please. I feel positive about the future. Some things will not change but I've learned to be flexible.
Thanks for asking.