FYI - Even though the three candidates we endorsed did not win, Brad Victor, Oregon Education Department “sexuality education expert”, said that if parents will speak out at every level, sex education can be easily derailed in a school district—even one where the programs are already firmly in place. The sooner parents start their challenges, however, the better.

If you read this to the end, your head will spin, if not explode.  The evil is so prevalent in this conference for teens, it is child abuse to even let them attend.  The "adults" that want to normalize this type of sexuality want to feed on our children.

When I walked into this year’s Oregon Adolescent Sexuality Conference in Seaside, Oregon, one of the first things I encountered was a table manned by three young teen boys. On the table was a collage that included many depictions of totally bare female genitalia—obviously pornographic and, one would think, illegal.

The collage included a drawing of a woman circa 1950 declaring, in the most base terms, what a woman’s private parts should smell like. It also included a drawing of a pigtailed little girl riding on a tricycle with the word “Vagina!” written above her, and another drawing of a young female child standing by a rose, with the word “Vagina” written below her on a chalkboard.
“Everyone can come inside” are the words visible along the outer edge of the piece, which appeared to be a decoupaged plate.

The boys smiled nervously as hordes of teens, who had arrived for what some described as a field trip, passed the display table. Planned Parenthood was on the steering committee of this conference.
The booth belonged to Youth for Education and Prevention of Sexual Assault (YEPSA), a supposedly teen-led initiative from Eugene, Oregon.

At a booth whose stated mission was the prevention of sexual assault, I could only wonder why the teen boys would be manning a table containing graphic pictures of female genitalia, suggesting that “everyone can come inside” a pigtailed little girl on a tricycle.

With that question in mind, I checked on the Internet and found that the group puts on performances, the first of which was The Vagina Monologues. The students stated they just finished a run of a play that they wrote about the life struggles of a transgendered woman. They have a transgender education panel coming up, and they do art shows around teen sexuality and gender.

About 10 teen facilitators lined up across the front of the room and introduced themselves. They gave their names and the pronoun they prefer (“I prefer ‘she,’” “I don’t have a preference but I identify as male,” etc.). This was in keeping with a theory emphasized over and over at the conference—that gender is fluid and is determined only by the person in question and how that person feels at that particular time about his or her gender. In others words, biology has nothing to do with gender.

That was evidenced by a teen boy who attended lunch the first day dressed as a woman, complete with wig, pearls and dress. He soon put aside the outfit, and was once again looking like a teen boy the next time I saw him. Another young man was decorated with glitter on his face and a lilting voice, both of which he shed later in the day.

Most of the facilitators were teen girls. Much of the response to these young girls’ queries and the discourse about sex and pornography came from two older men in our group. 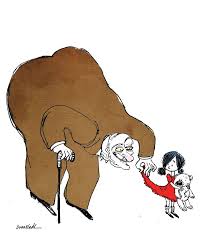 He had been discussing with the teens a social media outlet where one can post photos for just a few seconds, or as long as wanted, and then the pictures disappear, he said.

One teen facilitator asked whether it was okay for girls to send nude pictures to their boyfriends, and the adults generally agreed it was fine as long it was a boyfriend, but not to strangers. One woman finally pointed out that those pictures can go anywhere once they are sent and don’t disappear when the relationship dissolves.

The session was a dirty old man’s delight. These teen facilitators were probably high school age, some very young high school, with some appearing to be possibly middle school. Several of them were awkward and visibly uncomfortable with their role in this debacle, while others seemed far too seasoned and comfortable with the situation.

This is just a sampling of the plan that Planned Parenthood has for our teens. Check out our website at www.stopp.org, where I will be writing for several weeks on the unbelievably inappropriate materials and scenarios that were presented at this conference.

Oregon Education Department “sexuality education expert” Brad Victor prides himself on the fact that Oregon has the “most progressive sex education laws in the nation,” and brags about how he easily slid Oregon’s explicit Administrative Rule under the radar as a consent item at the state board level. The plan is that other states will follow suit. Many are already deeply embroiled in Planned Parenthood’s sex education. Those who are not embroiled are targeted.

Jim Sedlak’s book Parent Power!! is available free of charge on our website. It is a brilliant instructional tool that lays out the plan that parents can follow to get Planned Parenthood out of local schools. It is a plan that has been proven to work time and time again when parents follow it. Read Jim’s book today and take action!


Dear Mr. Victor,
If what I hear about is true about the Oregon Sexuality Conference in Seaside, Oregon is true, then you are among those who are personally responsible for the degrading of women, the animalization of men and the crumbling of culture. If the porn workshops, cross dressing and decoupaged plates of little girls with the word, "VAGINA" next to her is a lie, then please disregard my email. To appease to the lowest appetites of humanity and facilitate people, young and old, to nothing more than fodder for pleasure is repugnant.
All relationships, regardless of gender, should be based in a mutual understanding of dignity and respect.
As a woman, I need you to know that just because some woman say they are OK with being a "warm place to put it" --that is not so. By fueling the war on the women, that views us as mere receptacles for someone's DNA, you set us back to the days when at least society had the guts to say we weren't equal.

Please think about it.

SATAN ROAMS and his vile thoughts, words and deeds are everywhere!!! But, more and more, the DEVIL is targeting EDUCATION OF CHILDREN and DESTRUCTION OF THE FAMILY!!! In the 1950's Stalin began to institute a program to DESTROY THE UNITED STATES. He did this by INFILTRATING POLITICS, RELIGION, THE MILITARY, THE MEDIA AND EDUCATION…..and he's done it all through the godless concepts of COMMUNISM, FREEMASONRY & MATERIALISM, with one of his MAIN GOALS…..THE DESTRUCTION OF GOD and THE TRADITIONAL TWO PARENT FAMILY!!!!

From: "Rep Gelser"
Date: May 27, 2013 1:14:31 PM EDT
To: Caren
Subject: RE: ADOLESCENTSEXUALITYCONFERENCEFinalRegistration

It is not within my authority to investigate conferences. This does not appear to use funds from public schools, and instead appears to be a conference sponsored by a variety of organizations including public health and sexual assault prevention programs and other nonprofit organizations interested in reducing unintended pregnancy,suicide, domestic and sexual assault and sexually transmitted disease. It does not appear that anyone is mandated to participated as part of a school day.

I'm sorry I can't be of more assistance.

I urge you to at least look into this agenda-driven program.

Thanks for your contact with this incompetent legislator. I'll bet she received campaign money from Planned Parenthood.

Amazing what we can uncover.

Thanks for sending your conversations.