Shock to Some: Archbishop Sample Reaffirms Church Teaching Regarding Holy Matrimony. It Begins.

Notice the word "reign" regarding our Holy Father.  The tone of this article shows invincible ignorance on the part of the author and Jackie Yerby, who was on the board of Catholic Charities for six years and now hopes the Pope Francis will change Church doctrine.

They both don't understand the relationship for eternity that we are all bound for.  No matter if our children or parent or best friend are homosexual, they are always loved, but their sexual behavior would always be against Church teaching if they say they are Catholic.

Pope Francis can't change this teaching.  It is Christ's.  Catholics believe this.  Get over it.


"Since Pope Francis began his reign as the head of the Catholic Church a year ago, he's sounded a more welcoming tone toward gays.  But it hasn't led to a change in church doctrine opposing same-sex marriage -- and that's reflected in the potential ballot fight over the issue in Oregon.

Portland Archbishop Alexander K. Sample told his pastoral staff last month that the Archdiocese of Portland and the Baker Diocese would join the coalition opposing the same-sex marriage initiative. 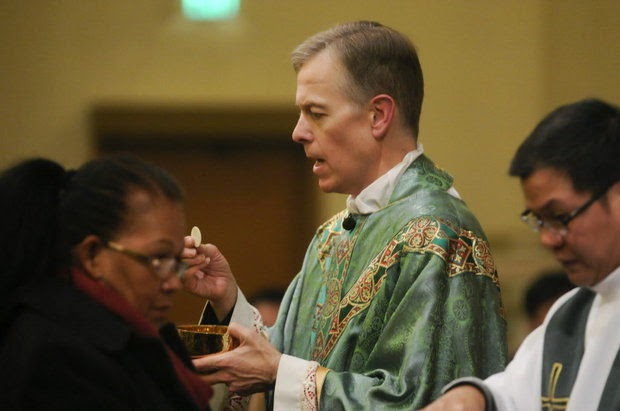 In a Feb. 12 memo, Sample directed his staff to "do whatever they can to help support this effort" and said that "it is my intention to commit the energies of the Church to help defeat this initiative and to uphold the uniqueness and sanctity of marriage between one man and one woman."

The memo was first publicly mentioned by the Los Angeles Times in a report on the fight over gay marriage in Oregon.

The archbishop's missive didn't come as a surprise to Jackie Yerby, a Portland parishioner and lead organizer for a new group called Catholic Oregonians for Marriage Equality.

"As much as I am hopeful about Pope Francis and the tone he is setting for the Catholic Church," she said, "it is going to take a while for that to really take root."

Yerby, who served on the board of Catholic Charities of Portland for six years, said members of her group plan to show up for the Ash Wednesday Mass at St. Mary's Cathedral and other churches with large buttons proclaiming their membership in the marriage equality group.

Yerby said her group doesn't see it as a protest so much as a "public witness" of their views. "We want to say, 'We exist, we're one of you and we do this out of how we understand our faith,'" she explained."

God Bless Archbishop Sample. Thanks for showing love to your flock by protecting us.

So Ms. Yerby, a proponent of homosexual "marriage", was on the Catholic Charities Board of Portland for six years. I think this shows a lack of wisdom and allegiance to the Catholic catechism for that particular umbrella charity. That is one of the reasons why I will continue to give to individual Catholic charities (Aid to the Church in Need, Peter's Pence, Priests for Life, etc.) rather than the umbrella charity called Catholic Charities.

The holy SNJM Sisters used to challenge us in religion class, asking if the devil works harder to ruin souls in red light districts (centers of sin), OR in Churches. The correct answer: in Churches (or holy places)!!! The devil already has prevailed in sinful places, Sister would explain, so he has to work doubly hard where people don't expect him to be...that life lesson has remained so true.