The first class relic of Pope Saint John Paul 11 will make an unexpected trip to Oregon.  Not even on the schedule, because of an Oregon priest's close relationship to an Order of Sister's affiliated with the Shrine, we are given this possibly once in a lifetime gift. 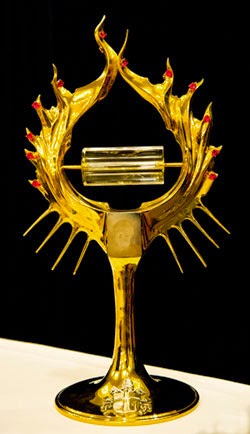 The blood is from the Saint John Paul II National Shrine in Washington, and is housed in an elaborate reliquary.  Many healings have been said to occur when visiting this loving Saint's relic.

The relic was given to the Knights of Columbus, which established the shrine in 2011. The shrine's website explains the design of the reliquary housing the blood:


"At the center of the reliquary is a glass ampoule that contains the Holy Father’s blood, which remains in a liquid state. Surrounding the relic is a nimbus decorated with 12 red stones representing the Twelve Apostles and with rays projecting downward. The design evokes John Paul II’s homily during the Mass dedicating the Divine Mercy Shrine on August 17, 2002. Citing the Diary of Saint Faustina, he said, “From here there must go forth ‘the spark which will prepare the world for [Jesus’] final coming.’ This spark needs to be lighted by the grace of God. This fire of mercy needs to be passed on to the world.” The late pope’s likeness is depicted just beneath the relic, and at the base of the reliquary in silver is a relief of his coat of arms. The reliquary was crafted by Wiesław Domański, a member of Saint Brother Albert Council 14332 in Lublin."


Many Catholics venerate the relics of saints as well as those related to Jesus Christ. These relics come in three classes: A first-class relic is from the body of a saint, a second-class relic is something used by a saint while a third-class relic is one that has been touched by a first-class relic, explained Father William Saunders, dean of the Notre Dame Graduate School of Christendom, on the website of the Catholic Education Resource Center.

"These relics summon us to appreciate more profoundly not only the heroic men and women, boys and girls who have served the Master so selflessly and generously, but especially the love and mercy of the Almighty who called these His followers to the bliss of unending life in His eternal kingdom," he wrote. 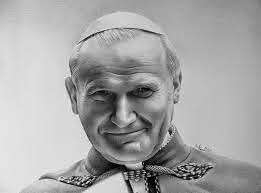 Thanks VOCAL. I'll be there.

we had a JP2 first class relic in out house over night! ;)