"Just who do we think we are?" How the Supreme Court’s conservatives explained their votes against "gay marriage".

From Quartz.com an interesting article on why these Supreme Court Justices voted against this decision.  Their decisions on maintaining the status quo for the common good is excellent reading.


The Supreme Court’s landmark ruling legalizing gay marriage throughout the US split along familiar lines, with the nine-member court’s four most conservative justices voting against a nationwide right to homosexual unions.

Chief justice John Roberts joined justices Antonin Scalia, Clarence Thomas, and Samuel Alito in opposing the majority’s opinion on the case brought by Ohio resident James Obergefell, whose 2013 marriage to his now-deceased partner was not recognized by the state. 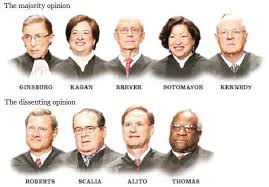 Here are excerpts from the four dissenting opinions (pdf) the naysaying justices filed.  From page 41 of this pdf you will find the complete arguments against this decision.

Go to page 41 of the pdf attachment for the whole text.  There's so much good reading.

Although the policy arguments for extending marriage to same-sex couples may be compelling, the legal arguments for requiring such an extension are not. The fundamental right to marry does not include a right to make a State change its definition of marriage. And a State’s decision to maintain the meaning of marriage that has persisted in every culture throughout human history can hardly be called irrational. In short, our Constitution does not enact any one theory of marriage. The people of a State are free to expand marriage to include same-sex couples, or to retain the historic definition.

It is not of special importance to me what the law says about marriage. It is of overwhelming importance, however, who it is that rules me. Today’s decree says that my Ruler, and the Ruler of 320 million Americans coast-to-coast, is a majority of the nine lawyers on the Supreme Court. The opinion in these cases is the furthest extension in fact— and the furthest extension one can even imagine—of the Court’s claimed power to create “liberties” that the Constitution and its Amendments neglect to mention.

The majority invokes our Constitution in the name of a “liberty” that the Framers would not have recognized, to the detriment of the liberty they sought to protect. Along the way, it rejects the idea—captured in our Declaration of Independence—that human dignity is innate and suggests instead that it comes from the Government. This distortion of our Constitution not only ignores the text, it inverts the relationship between the individual and the state in our Republic. I cannot agree with it.

The Constitution says nothing about a right to same-sex marriage, but the Court holds that the term “liberty” in the Due Process Clause of the Fourteenth Amendment encompasses this right. Our Nation was founded upon the principle that every person has the unalienable right to liberty, but liberty is a term of many meanings. For classical liberals, it may include economic rights now limited by government regulation. For social democrats, it may include the right to a variety of government benefits. For today’s majority, it has a distinctively postmodern meaning. To prevent five unelected Justices from imposing their personal vision of liberty upon the American people, the Court has held that “liberty” under the Due Process Clause should be understood to protect only those rights that are “‘deeply rooted in this Nation’s history and tradition.’” … And it is beyond dispute that the right to same-sex marriage is not among those rights.

Thank you! Today was just tragic. This helps!