March of Dimes (MOD) claims they are neutral on the issue of abortion and are not involved with the abortion industry, including Planned Parenthood. However, a former employee is bringing their past statements into question and alleging that MOD has ties to using aborted babies’ body parts for research.
In South Carolina, Joy Barr worked as MOD’s community director for the organization’s Augusta, Georgia, and Aiken-Sumter, South Carolina, offices, and raised more than $250,000 for the organization. WND reports that Barr started asking her supervisor’s specific questions after watching the Planned Parenthood videos that were released by The Center for Medical Ethics (CMP).

She explained, “I was horrified by what I saw in the videos but not completely shocked. But when Cecile Richards (CEO of Planned Parenthood) made the comment about the importance of research using aborted fetal tissue for Alzheimer’s and Parkinson’s, my next thought was, do we?”

The response Barr received was shocking. In July, she received an email from MOD’s director of public relations, Michelle Kling, that said, “Joy, yes, the March of Dimes has supported some research using cells and tissues obtained from induced abortion and probably will continue to support some.” 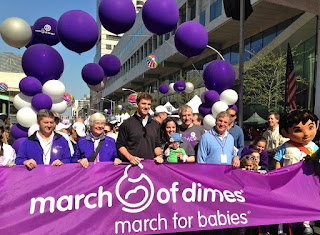 WND also contacted Kling, asked her the same questions as Barr and received the same response.
Kling said, “March of Dimes does have a small number of research grants in our very large portfolio, one or two every year, but the research grants are not given to Planned Parenthood, they are given to research universities whose investigators are using (aborted) fetal issue, and the material may or may not be obtained from a Planned Parenthood clinic.”


She added, “It could be obtained from a hospital that performs abortions, or the tissue might come from a different organization than Planned Parenthood that performs abortions. We generally have one or two grants per year that involve fetal tissue. There are some people who would prefer that we don’t have any.”

Barr was later fired because she wouldn’t stop asking questions.

She said, “I was just an employee trying to get answers to my questions, and at first they tried. And then it basically came to a dead stop, and they said you need to stop asking questions and go back to doing your job. You’re not getting any more information.”

Barr sought out help from the Thomas More Society, a nonprofit civil rights organization. Their special counsel, Peter Breen, said the following about March of Dimes in a statement: “The stated mission of March of Dimes is, ‘a fighting chance for every baby.’ That mission is totally inconsistent with experimenting on organs harvested from aborted babies. In the wake of revelations that Planned Parenthood is trafficking in the body parts of aborted babies, the public deserves to know whether the March of Dimes is funding this barbaric practice. Thomas More Society is providing legal counsel for Joy Barr as she works to get to the bottom of March of Dimes’ involvement in the baby parts trafficking scandal.”


Although Barr is horrified over MOD’s connection to Planned Parenthood, she is not surprised that they don’t want to talk about it.

She explained, “March of Dimes does not want to talk about this publicly. It’s like when your 8-year-old asks you if Santa Claus is real. You may not lie and say, ‘yes,’ but you only include information that leads him to believe that is the case. I’m not an 8-year-old child. I’m a 38-year-old employee. I asked a point-blank question, a yes or no question, and I got back a 42-page document.”
As LifeNews previously reported, March of Dimes released a statement saying they do not support Planned Parenthood after the CMP expose’ videos were released but did say that five of their chapters have a relationship with the abortion giant.
Here is the March of Dimes statement:


To set the record straight, the March of Dimes does not have a relationship with Planned Parenthood. Additionally, the March of Dimes does not promote or fund abortion services, nor may Foundation funds be used for directive counseling regarding abortion. Violation of this policy would be grounds for immediate cancellation of a grant or cooperative agreement. Since 2007, five local March of Dimes chapters have given local grants to Planned Parenthood exclusively for prenatal education. In these communities, these are the only such services available to improve the health of low-income women and reduce the risks of birth defects, low birthweight, and prematurity in their babies.

To quote March of Dimes "March of Dimes chapters have given local grants to Planned Parenthood exclusively for prenatal education." So the grants from MOD are fungible. Their grants free up money from other accounts to help kill more babies. I won't be giving to MOD. There are many charitable organizations that have no connection to the killing of unborn human beings. Thanks for the article.