Here is an explanation of the song we all love at this time of year. No matter what challenges the "world" gives Catholics, we find a way to remember the - REASON FOR THE SEASON

The Twelve Days of Christmas - December 25 until January 6th Epiphany.

"The Twelve Days of Christmas" was written in England as one of the "catechism songs" to help young Catholics learn the basics of their faith. In short, it was a coded-message, a memory aid. Since the song sounded like rhyming nonsense, young Catholics could sing the song without fear of imprisonment. The authorities would not know that it was a religious song. 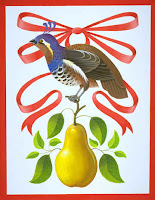 The song goes, "On the first day of Christmas my true love gave to me…"
The "true love" mentioned in the song doesn’t refer to an earthly suitor, but it refers to God Himself. The "me" who receives the presents refers to every baptized person. i.e. the Church.
1st Day: The partridge in a pear tree is Christ Jesus upon the Cross. In the song, Christ is symbolically presented as a mother partridge because she would feign injury to decoy a predator away from her nestlings. She was even willing to die for them.
The tree is the symbol of the fall of the human race through the sin of Adam and Eve. It is also the symbol of its redemption by Jesus Christ on the tree of the Cross.

2nd Day: The "two turtle doves" refers to the Old and New Testaments.


3rd Day: The "three French hens" stand for faith, hope and love—the three gifts of the Spirit that abide (1 Corinthians 13). 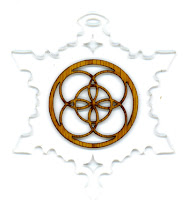 4th Day: The "four calling birds" refers to the four evangelists who wrote the Gospels—Matthew, Mark, Luke and John—which sing the song of salvation through Jesus Christ.

6th Day: The "six geese a-laying" is the six days of creation.

7th Day: The "seven swans a-swimming" refers to the seven gifts of the Holy Spirit: wisdom, understanding, counsel, fortitude, knowledge, piety and fear of the Lord.

8th Day: The "eight maids a milking " reminded children of the eight beatitudes listed in the Sermon on the Mount. 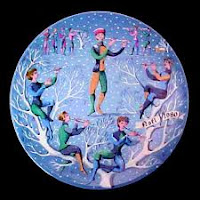 12th Day: The ‘twelve drummers drumming" were the twelve points of belief expressed in the Apostles’ Creed: belief in God the Father, the Son and the Holy Spirit, that Jesus Christ was born of the Virgin Mary, mad"e man, crucified, died and arose on the third day, that he sits at the right hand of the father and will come again, the resurrection of the dead and life everlasting.

This is the time of martyrs too, St. Stephen and the Holy Innocents. May 2011 be a year when we remember those who have suffered real losses for Christ. Let us continue to bring real peace and justice to earth by valuing the sanctity of life.

Merry Christmas and Happy New Year to you and yours,

"The more we are proud that the Bethlehem story is plain enough to be understood by the shepherds, and almost by the sheep, the more do we let ourselves go, in dark and gorgeous imaginative frescoes or pageants about the mystery and majesty of the Three Magian Kings." - Christendom in Dublin, Ch.3 by GK Chesterton
Posted by VOCAL at 2:44 PM

"A bit of modern folklore claims that the song's lyrics were written as a "catechism song" to help young Catholics learn their faith, at a time when practicing Catholicism was discouraged in England (1558 until 1829). There is no substantive primary evidence supporting this claim, and no evidence that the claim is historical, or "anything but a fanciful modern day speculation."[1]

Sorry to disappoint you but the song does not have origins as being a Catholic catechism lesson. And there is belief that it's originates from France.

Bah Humbug. I still believe the lessons learned are a great way to get to Heaven. No matter "modern" or "historical"...I love the message and thank God for wherever it came from. Thanks for looking into it...I like it no matter what.

After looking into it myself. It seems that the main "problem" with this song is that Catholics used it to teach the main tenets of the faith. They say it could have been from 1990...hmmmm very strange and doesn't set right. I like the historical sense, I still believe it's true.

The main evidence that it is not a secret Catholic catechism is that none of the alleged meanings is specifically Catholic. There would be no need to keep secret one's belief in Jesus Christ on the Cross, or the five books of the Pentateuch, or the two Testaments.

Whether it's folklore, secular or religious, looking through the history of this Christmas classic it's fun to see how it has progressed.

As a catechism lesson, it would be so worthwhile. We should try it on our Catholic children to see if they know all the answers. It's a challenge we all should be up to. I'm on it.

If some of the folks commenting on your blog think that Roman Catholics were not persecuted in England during the time period noted on your blog, I would like to sell them a bridge located in Brooklyn. And I totally believe what was said about the song and it's symbolism. Keep the FAITH !! Perhaps they could read a bit about Cromwell's persecution of Irish Catholics. Love to you from David.