Here is Bishop Sample's answers to questions put to him by the Oregonian.  We need to step up our prayers for his discernment because, in my opinion, there will be pressure put on him by the liberal guard in the Pastoral Center.

For example, when I was speaking to Todd Cooper, Archbishop Vlazny's 'Special Projects' man regarding my questions as Director of Catholics for McCain/Palin in Oregon, he said that that "things are different in Portland", when referring to Rome as a guideline for Catholic votes.  Well, yes things are different in Portland, but our church is Catholic Mr. Cooper. Roman Catholic not Portland Catholic. 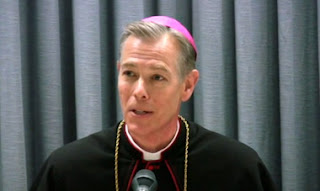 Carolyn - thank you for the links to discussions of music ! Bishop Sample mentions Mnsgr. R.J. Schuler as an influence. Glory to God -

Yes, I have Father and am beside myself with joy. God Bless you.

Dear Carolyn - The Oregonian writer in Saturday's paper shows me that our new Archbishop will need our support..... the Q&A style was "edited for clarity and brevity", says the author of the article. Right away, his "answers" are not necessarily his own. The writer obviously has an attitude and a list of three pet peeves. There are better interviews on YouTube. You are a good reporter, Carolyn, and we all have been waiting for a strong and holy man to be in charge here... heavens knows, he will be entering a gauntlet at the Chancery ! God be with him.

Thanks Carol for the kinds words. I will have to look into more of the YouTube videos.

It really gives me a sense of the wonder that awaits us.