By MARTIN ESPINOZA
THE PRESS DEMOCRAT

Santa Rosa Catholic Bishop Robert Vasa said Friday that Pope Francis has challenged him and other church leaders to become more “pastoral” in their work, but is not asking them to abandon the Church’s moral teachings about the sins of homosexuality, abortion and birth control.

Vasa’s comments came one day after the pope rocked the Catholic world with published statements that the church “cannot insist only on issues related to abortion, gay marriage and the use of contraceptive methods.” While the church’s opposition to these things is clear, a more pastoral approach to ministry is needed, the pope said.

Many observers interpreted the the comments as a softening of the church’s stand on the touchstone moral issues. The bishop took a different view. 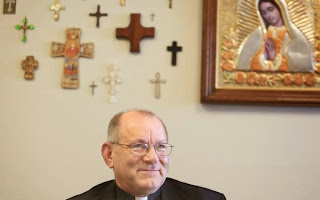 Vasa, who adheres to a strict, or traditional, interpretation of church doctrine, said the pope was merely saying that “when we deal with those with whom we morally disagree that we do that in a spirit of conciliation and compassion and receptiveness.”

He acknowledged the pope’s emphasis presents him with a personal challenge. As a bishop, Vasa said he is “geared more toward a canonical mindset and I recognize the need for administrative leadership in church. I also recognize that pastoral leadership, while wonderful, requires someone stepping in and taking up the administrative role.”

Some North Coast Catholics heralded the pope’s statements, made during a lengthy interview with an Italian Jesuit journal, as a call for a new tone and direction for the church, a message they say is lacking in the local diocese.

“It’s not the same tone we have in our diocese, and likely probably other dioceses as well,” said Lori Edgar, a member of St. Eugene’s Cathedral in Santa Rosa and a Cardinal Newman High School parent.

Edgar, whose family was part of St. Vincent de Paul Church in Petaluma when she was young, said she hopes the pope’s words will help create more “openness” in the Santa Rosa Diocese. Edgar said she particularly took to heart the pope’s statements that the church should not be “so judgmental.”

Asked if he would welcome to St. Eugene’s Cathedral a Catholic woman who had an abortion or is contemplating having one, or a gay person or someone who is practicing birth control, Vasa said he would if they were open to changing their ways.

“Like the pope says, I don’t necessarily judge them, but they have to somehow judge themselves and recognize that they are living and acting in a way which is not consistent with what the church teaches,” he said.

“And they have an obligation at least to take up the current literature and really study the issue and not simply as a knee-jerk reaction give in to the pressure of the culture.”

Edgar said she believes the pope “is setting a new tone for the Church, something for all of us to think about ... It’s a home for all.”

“Our current Santa Rosa Diocese is going through some struggles with this,” she said, noting Vasa’s controversial move this year to require local Catholic school teachers to sign a morality clause as part of their employment contracts.

In an effort to quell rising unrest among teachers, parents and some students, the bishop decided not to require teachers to sign the morality “addendum” to their contracts. It would have required educators employed by the diocese to affirm that contraception, gay marriage and euthanasia are “modern errors” and “matters that gravely offend human dignity.”

The Santa Rosa Diocese, which extends north to the Oregon border, is home to 165,000 Catholics. Catholicism is the largest religious denomination in the nation.

A 2008 Pew Research survey indicated that a third of the people raised as Catholics said they had left the church. These “lapsed Catholics,” if they were considered members of a church, would be the third-largest denomination in the country, behind Catholic church-goers and Baptists.

Contraception is an especially sensitive issue with American Catholics. Despite the church doctrine, 82 percent of U.S. Catholics believe birth control is morally acceptable, according to a 2012 Gallup poll.

Mel Amato, a member of the parish pastoral council and finance council at St. John the Baptist Catholic Church in Healdsburg, said the Pope is trying to “maintain a balance” in the teachings of the church.

“He’s not talked about compromising or modifying the basic teachings of the church in response to populism or popular pressures,” he said.

Amato, a Catholic “traditionalist” who says the doctrine of the Catholic Church is not subject to a democratic vote, said many Catholic teachings receive little or no attention from the media. Usually, the media focuses only on the church’s position on issues such as abortion, contraceptives and gays, he said.

“He’s saying all the teachings are important, not just the ones that get all the press time,” he said.
During an interview at the Santa Rosa Diocese chancery, Vasa talked at length about the pope’s extensive interview.

Asked if he agreed with the pope’s view that some in the Catholic Church are “obsessed” with dogmatic and moral teachings, Vasa said he has not witnessed that obsession.
“I certainly do know that there are individuals, and I certainly would probably be among them, who firmly believe that these are core cultural issues about which we must be vocal,” he said. “But I’m not obsessed about them. A vast majority of the things that I write do not include abortion as a topic or contraception or divorce and remarriage.”

“Is there a need for teaching about those things? Absolutely. Are there some folks who overstep the boundary and say, ‘OK we’re preaching about this every single Sunday?’ Well, there may be. But there’s a vast majority of people who never talk about it.”

Vasa said that if “everyone talked about it a little, there would be fewer who feel the need to talk about it more,” adding that abortion is a social justice issue.

“What the Holy Father is calling us to do is to promote the Gospel message, not starting from, ‘Oh, you’re bad and going to hell,” Vasa said. “But rather from a positive presentation of God’s goodness, of God’s love, of God’s mercy and God’s call to everyone of us to live a life more in conformity with what God wants us to do.”
Posted by VOCAL at 11:32 PM

Thanks for your good work, Carolyn!!

Just passing on good words from Bishop Vasa. My pleasure. But these words made some men, interestingly enough, angry.

Thanks for your kind words.

Believe me, I don’t like the considered conclusions I am coming to, such as, if they really believe in Fatima, why have they not obeyed HER intructions?

Here in the Diocese of Orange, PICO is holding many events with the approval of the Diocese?

What more do we need to determine whether or not to follow to the slaughter?

As for myself, and hopefully those I speak with, I will follow Tradition. She has recently spoken at both Quito, and Akita on the sad state of the Church. This morning we were told that Pope Francis made the statement that things have never been better in the Church. If he really said that, I want to sell him a bridge, CHEAP!

Thank you for your kind reply.


God bless, yours in Their Hearts,