Surprise! Pope Francis - the First Jesuit and from Latin America

Jorge Mario Bergoglio is the new Pope of the Catholic Church

As you know, the duty of the conclave was to appoint a bishop of Rome, and it seems to me that my brother cardinals have chosen who is from far away. Here I am.

I would like to thank you for your embrace, also to the Roman Catholic Church and the bishops, thank you very much. And first and foremost, I would like to pray for our bishop emeritus, Benedict XVI

Let us begin this journey together… this journey for the Roman Catholic Church. It is a journey of friendship, of love, of trust, and faith. Let us pray always for one another. Let us pray for the whole world. Let us have a big brotherhood.

I wish that this journey for the Church, which we will start today… will bear fruits for the evangelizing of this beautiful city. 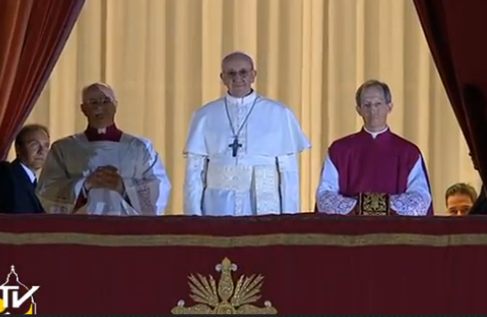 "He has affirmed church teaching on homosexuality, though he teaches the importance of respecting individuals who are gay. He strongly opposed legislation introduced in 2010 by the Argentine Government to allow same-sex marriage. In a letter to the monasteries of Buenos Aires, he wrote: "Let's not be naive, we're not talking about a simple political battle; it is a destructive pretension against the plan of God. We are not talking about a mere bill, but rather a machination of the Father of Lies that seeks to confuse and deceive the children of God." He has also insisted that adoption by gays and lesbians is a form of discrimination against children. This position received a rebuke from Argentine president Cristina Fernández de Kirchner, who said the church's tone was reminiscent of "medieval times and the Inquisition". Austin Ruse

He loves the poor of this world, but NOT social programs.
Posted by VOCAL at 12:54 PM

He is prolife, against euthanasia, strong against same-sex marriage. In 2001, he visited an AIDS Hospice, is quite compassionate, he prefers spirituality rather than the ersatz "social justice"... I watched the entire thing and am impressed, Carolyn. We pray that he is strong in orthodoxy and true Catholic teaching; he might be......... Gloria !!

This is so wonderful and so God. I think he is and will help us on our way to Heaven.

I was teaching today in the Book of Acts. During Prayer time we heard the kids in the school start cheering! It was just Holy Spirit Awesome!

Pope Francis appears to be a good choice, at first look.

WE have a winner. He is a simple man which leaves more room to hear the Lord.

At least that's my take. He will be a good example for inflated egos of any clerics we might know.