A Papal Two Weeks Notice - A Lesson in Urgency

by CM LeMark, MA Theology (an advisor of VOCAL)
If Our Lady of Lourdes had told the peasant girl Bernadette, "I am the Immaculate Conception" only three days later, Pope Benedict VXI would have made it exactly fourteen days before he hung up his miter. No doubt the culmination of months, perhaps years, of prayer and planning; Our Holy Father made a humble, wise and tactical decision to resign.

He gave his two weeks notice.


hy the hurry?  Why the timing? With a little bit of pondering, and understanding that he has been a present and proactive Pontiff for eight years, it is simple to see why he has chosen this course of action. Our Holy Father is protecting his flock.  He is protecting us all from the rapidity of evil that threatens to steal souls; from the human elements of the Church that have yet to be redeemed (even in her hierarchy); and the future Pontiff from isolation. 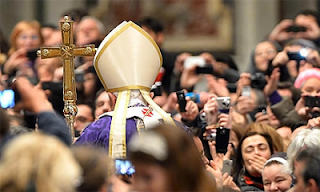 With the news of his resignation, the entire Church, indeed the world, was shocked.   From the Catholic school kid to the closest Cardinal aide, we were all in this one together. No advising. No politicking.  No distraction.


In this rising tide of evil, there is no time to lose.


He knows that were he to become incapacitated mentally (from either disease, fatigue or age), that the powers that be around him would be the ones calling the shots.  Who knows how long he could be a figurehead of sorts?  What crisis would be allowed to take root and steal more souls?  Cardinals and Papal aides are not protected by the Holy Spirit with infallibility.  The last thing this "news-in-real-time world" needs is more confusion on the Catholic take on evil. He is hardly running from any type of noble suffering. Indeed, the "papacy involves prayer and suffering," he says in his letter, but he will do that without a miter regardless.


There is no time to lose.


He knows that the death watch of a pope, especially in perilous times as these, can take days, months and years. Facebook posts abound, a reality TV show could take root, and the twitter-verse is unrelenting.  As he deteriorates, the powers that be can plot, plan and negotiate dealings, and waste efforts trying to thwart the movement of the Spirit. There is no time to lose.


He knows that the prescribed period of mourning, the Papal Funeral Mass and the hobnobbing between heads of state, international players and Church officials cut deals and speculate on the Conclave ahead.  These required events alone, while incredibly beautiful, take weeks away from the careful navigation of this great Ark of the Church. In these times of rapid technology, history is in the making in real time, and millions witness that horror.  The waves are getting higher, the winds are stronger and jagged rocks are increasing…There is no time to lose.

He knows that by only giving two weeks, Cardinals from around the world are hustling and bustling to put their local affairs in order for a time of absence in their respective dioceses, to ready for the conclave.  The short time frame cannot eliminate deals, negotiations and the like, but when you are tight on time, you cut to the chase. A papal resignation with only two weeks notice gives the unavoidable politicking a restricted time limit.  When we humans are limited, it is then that the Holy Spirit can really do His stuff. There is no time to lose.


He knows that they can't even delay the conclave very long (for incognito deliberations) due to Holy Week! Right now, the College of Cardinals has to plan backwards, in a sense. They need to figure the most fitting and appropriate day for the Papal Mass, and plan before that.  This can't go on long.  Pope Benedict is telling his brothers in the College of Cardinals that there will be a new Pontiff by the third week of March.  There must be.  His Pontificate will begin in Lent. He will carry the Cross in the Coliseum. There is no time to lose.


He knows that the Vatican can be a very lonely place to be.  He knows that he  cannot entrust his innermost thoughts to those he lives with day to day; perhaps it is distrust or even the desire not to burden one with a weight he alone carries.  He knows that the evil that the next Pope faces will even be more horrific than he has confronted.  He knows the new Vicar of Christ must have what he doesn't have right now: physical strength and a friend. By resigning his papacy, and remaining in a cloister within the Vatican, Pope Benedict XVI has ensured that  the new Roman Pontiff  will have both.


There is no doubt that the beautiful lady that little Bernadette Soubiroux saw in the grotto that day had a hand in all this. She is the bride, she is the mother.  She sees the present situation the Church finds herself in, and the tides that are coming in and no doubt gave the green light to our beloved Pontiff.  By his resignation, he has made the tactical decision to protect his flock by laying his life down for his friends.

Prayer for the Church from the Knights of Columbus.

O Lord Jesus Christ, Supreme Pastor of Your Church,
we thank you for the ministry of Pope Benedict XVI
and the selfless care with which he has led us
as Successor of Peter, and Your Vicar on earth.

Good Shepherd, who founded Your Church
on the rock of Peter’s faith
and have never left Your flock untended,
look with love upon us now,
and sustain Your Church in faith, hope, and charity.

Grant, Lord Jesus, in Your boundless love for us,
a new Pope for Your Church
who will please You by his holiness
and lead us faithfully to You,
who are the same yesterday, today, and forever.
Amen.
Posted by VOCAL at 8:20 PM

Beautiful and insightful article by CM Lemark !! Thanks for including it in your blog.