Pope on a Bus.....Tri-Met for Oregon Priests and Seminarians?

Cardinal Dolan: “So we take the buses over and cardinals kind of wait outside to greet the new Holy Father as he comes back to Doma Santa Marta…and as the last bus pulls up, guess who gets off the bus? Pope Francis” 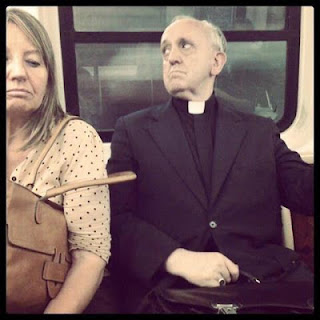 With a Pope on the bus when he lived in Buenos Aires doing his own cooking, etc., what will become of the cart of Starbucks, cookies and Lindor Truffles, that graced the Archdiocese of Portland when I was allowed upstairs.

Regarding his living in Buenos Aires...

"We live in the most unequal part of the world, which has grown the most yet reduced misery the least," he said during a gathering of Latin American bishops in 2007. "The unjust distribution of goods persists, creating a situation of social sin that cries out to Heaven and limits the possibilities of a fuller life for so many of our brothers."

Since becoming archbishop of Buenos Aires in 1998, Cardinal Bergoglio has created new parishes, restructured the administrative offices, taken personal care of the seminary and started new pastoral projects, such as the commission for divorcees. He has mediated in almost all social or political conflicts in the city; the newly ordained priests are described as "the Bergoglio generation"; and no political or social figure misses requesting a private encounter with him."  Catholic Sentinel...who knew.


We could all take Pope Francis' simple life to help our own.  God Bless you Holy Father.

I'm going to hold my "colorful" comments, deed if their are any until I read more regarding the liberals take on him.

Reform means something to them that doesn't mean reform to him, or us...we'll be thinking more with this Holy Father that's for sure.

I lived in a 4rent Argentina from 2007 to 2010. Most of porteños are not believers but everyone knew who Bergoglio (now renamed as Francis) was and even though his dispute against the government he was respected by everyone. I trust in his intentions in reforming the church, and I am positive he has the strength and the intelligence to do it spite his age.
Good luck Francis!