Oregon's Very Own Auschwitz: Right on the I - 5 Corridor 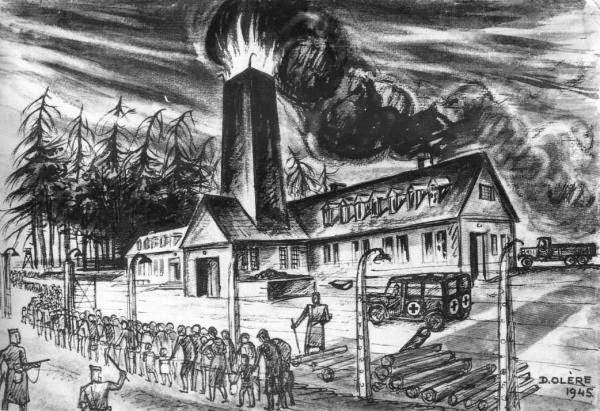 We see it and think it's ecological when it's really diabolical. It's just a modern one of these.

The Covanta Marion waste-to-energy facility in Oregon that incinerates British Columbia "medical   waste," including aborted babies.
VICTORIA, British Columbia, April 23, 2014 (LifeSiteNews.com) – The British Columbia Health Ministry has admitted that the remains of babies destroyed by abortion in B.C. facilities are ending up in a waste-to-power facility in the United States, providing electricity for residents of Oregon.
The province’s Health Ministry said in an email to the B.C. Catholic that “biomedical waste” shipped to the U.S. to be incinerated includes “human tissue, such as surgically removed cancerous tissue, amputated limbs, and fetal tissue.”

“The ministry understands that some is transferred to Oregon. There it is incinerated in a waste-to-energy plant,” the email stated.

The ministry said that contractors handling the province’s “biomedical waste” follow “health and safety protocols, as well as federal, provincial, and local regulations.”

Kristan Mitchell, executive director of the Oregon Refuse and Recycling Association, told the B.C. Catholic that the “biomedical waste” likely ends up at the Covanta Marion waste-to-energy facility in Oregon since it is the only facility that uses waste to power the grid. The facility confirmed that it still receives and incinerates B.C. medical waste.

The power facility, located in Brookes just off the I-5, burns waste in two massive boilers at a temperature of about 2,000 degrees Fahrenheit. The heat transfers into water tubes, which creates steam to drive turbines. The turbines generate electricity.

A 2007 article about the Marion waste-to-energy facility that appeared in the Willamette Live — ironically titled “Burn, Baby, Burn” — stated that at the time the incinerator burned about 800 tons (1,764,000 pounds) of medical waste per year.

“Medical waste is brought to the facility in sealed boxes and is carried to the furnace on a conveyor belt which layers it with the rest of the solid waste being processed,” the article states.

Locals at the time protested the “importation and burning of medical waste,” expressing concern about breathing “toxic emissions.”

The news comes one month after the remains of more than 15,000 aborted babies were found to have been incinerated, along with other “medical waste,” to heat and generate power for British hospitals.

Although it is legal to burn these babies in Oregon, the issue has not been brought into the open and the Board of Commissioners in Marion County are getting informed.

They want to do something about this and didn't even know that "waste" from Canada was being burned in Brooks, Oregon.

Thanks for posting this article. I sent an email to them. The email address is:

BREAKING: Marion County Commissioners put an immediate halt to use of aborted babies in "waste to energy" plant and call an emergency meeting for *tomorrow morning at 9 am* in the Board of Commissioners office in Salem on 555 Court St. NE, 5th floor. PLEASE SHARE AND ATTEND.