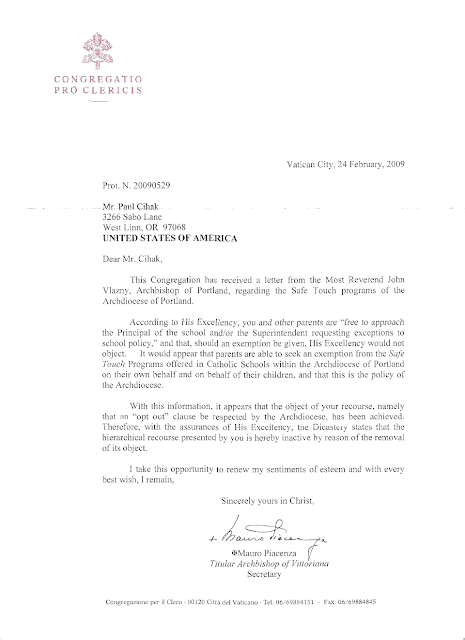 Although three years old, this letter from Rome shows that Archbishop Vlazny's understanding is that parents can "freely approach the superintendent and principal to opt-out" from the sex education classes in Catholic schools and churches.  There has not been part of any mention of these programs giving parents their choice even though it is an option.

Committee for Children - Talk about touching
The Archdiocesan Council of Catholic Women (ACCW) had a four month ad hoc committee that I put together (subsequently "fired" from a five year volunteer position) and saw the videos that precious children are shown in Church and catholic school.

Many public school moms and dads would not let their children see these videos.  The ACCW wrote a letter to the Archbishop regarding this negative feedback.

Nothing was done and nothing is still being done.

The senior Vice -President of Preasidium writes on Homosexual issues and should not be putting things into the head of innocent children. Promoting homosexuality has nothing to do with the protection of children.

HERE'S WHAT THE CHURCH SAYS:

“If the policies and programs to protect children from sexual abuse you have adopted are to achieve their full purpose, they need to be placed in a wider context. Children have a right to be educated in authentic moral values rooted in the dignity of the human person. We need to reassess urgently the values underpinning society so that a sound moral formation can be offered to young people and adults alike. Every member of society can contribute to this moral renewal and benefit from it. Truly caring about young people and the future of our civilization means recognizing our responsibility to promote and live by the authentic moral values which alone enable the human person to flourish.”


Pope Benedict XVI to Catholic Bishops of the United States on April 16, 2008 regarding the issue of the clergy sexual-abuse scandal.