This is an Nazi anti-propaganda Walt Disney cartoon circa 1943.   It can be used as a meditation for today: religious freedom, indoctrination, death panels, homeschooling, FREEDOM.


May Day and the role of St. Francis of Assisi Catholic Church in Portland, Oregon.
Portland police are warning May Day demonstrators that violations of the law will not be tolerated, and now we know why. This from an Occupy Portland Tweet: 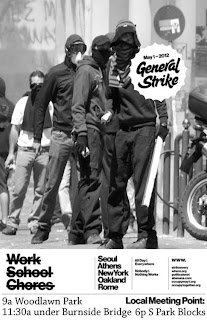 Their faces may be hidden, but they have their own
propaganda machine, or as the young rads would have us call it today, an “Information Warfare Spoke” from which the following video originates.

–notice how it begins by commemorating the history of the first May Day in America (1886 Haymarket Massacre in Chicago) when a dynamite bomb was thrown at police. Yep, dynamite bomb. And according to these useful idiots that same world returns to America on May 1st, 2012…


The cohorts responsible for the above propaganda call themselves The Portland Liberation Organizing Council (PLOC). They believe in [quote], “collective control of community resources, including land, housing and space to organize.”


For the uninitiated or uneducated, this is called Communism. A failing philosophy and political system that was and remains ultimately responsible before God and man for the deaths of millions of real living innocent persons.


PLOC is coordinated through a spokes council comprised of working clusters (see diagram). Each cluster is comprised of groups or members within groups from the radical community that are focused on a specific area of work.

So, Portland police aside, guess if they have their own way about it the specific focus of work on May 1st this year will be that “nobody, and nothing works” and anarchy alone prevails in the streets of Portland until Capitalism is done away with.

Radicalism and anarchy is widely associated with the Occupy Movement and May Day is its big rally and cry-in, not to be confused with love-in, peace-out, or even justice.  But for Catholics that’s not what May 1st, or for that matter, the entire month of May represents–and no Catholic or parish should ever support this rubbish. That’s why faithful Catholics in Western Oregon should start asking the Archpdx chancery why the spokes council meets every Thursday at a Catholic Church? Again, from the source:


This is a day when those heavily involved in working groups within Occupy Portland have an opportunity to exchange announcements, connect, and decide proposals affecting the inner workings of Occupy Portland. Anyone not associated with a group is welcome to attend and participate by sitting in the open caucus. Currently held in the Cafeteria at St. Francis.

Here’s a question I would like answered: Why does the Archdiocese of Portland, Oregon, permit St. Francis of Assisi Catholic Church to house, promote, and support Occupy Portland, when it’s obvious that in pursuing its goals OP plans, promotes, and enables lawlessness and violence, in effect endangering society?

I can’t believe the Sacred Heart is pleased with His body contributing to the scandal of police and thieves slugging it out in the streets on May 1st, the feast of St. Joseph the Worker. I do believe, however, that the following suggestion would be more merciful and in accord with the mind of Christ: May 1 is celebrated in Communist countries as the Day of the International Solidarity of Workers. Today would be a good day to pray for atheistic Communism’s influence to cease and a proper application of the principles explained by Leo XIII in Rerum novarum and John Paul II in Centesimus annus to be the guide used by nations–including our own.
To voice your charitable objections…
+++++++++++++

Praiseworthy....don't let anyone tell you differently.

NO OregonTax Dollars for Abortions. Let's get moving.

Oregon Catholics need to get behind this initiative.  No other organization is doing what these folks are doing.  This is a time we all need to pull together and get signatures if we can and pray like we can to end this scourge funded by our money in Oregon.  It's simple and to the point.  No bells or whistles.  Let's get moving.

For Immediate Release
(March 22, 2012) – Abortion. It’s a controversial subject, but one point where many people can agree is that taxpayers should have a choice about whether or not they must fund the procedure.

Proposed Oregon state Initiative #25 would allow voters to choose whether abortions should continue to be publicly funded. Volunteers around the state are currently collecting signatures that will put the question of taxpayer-funded abortion on the November ballot.

“Today, one in three abortions — about 3,500 each year — are fully paid for by Oregon taxpayers,” said Jeff Jimerson, Co-Chief Petitioner of the initiative. “And while this isn’t about restricting a woman’s legal right to choose abortion, it is about giving Oregon taxpayers freedom from being forced to fund the highly controversial procedure.”


Albany resident Jimerson, along with Co-Chief Petitioners Lee Edward of Corvallis and former State Senator Marylin Shannon of Salem, are heading up the Oregon 2012 Petition Committee, a diverse grass-roots group of citizens who want to give Oregon taxpayers a choice.

“We’re relying on the efforts of hundreds of volunteers around the state to collect signatures,” Jimerson said. “Because we’re not using any paid petition circulators, getting the attention of concerned citizens, like-minded organizations and faith-based communities is very important right now.”

The Oregon 2012 Petition Committee is not affiliated with any political or religious organizations — it’s truly a citizen-driven group.

Organizers say the goal is to collect 150,000 signatures by May 18, one week before the Secretary of State’s “early submittal” deadline. Time is short, but confidence remains high that enough signatures will be collected to place this issue before voters in November.

“We have a wide base of enthusiastic, supportive volunteers around the state,” Jimerson said. “But there’s still time for many more people and churches to get involved in circulating the petition. Every single signature is important.”

The website for Initiative #25, www.Oregon2012.org, includes information on how churches can participate in “Sign on Sunday” activities to help circulate and share petition sheets with church members. Resources for churches — including printable posters, bulletin inserts, and an inspirational 3-minute video — can be downloaded from the website.

This is a page out of the Archdiocesan Catholic Women's Conference Book for 2004.  I was the Church Commission Chair for five years until the Archbishop had me removed. Click
This post is to thank God for his mercy and guidance through many experiences.  On the  anniversary of my family's entrance into the Church, this is the condensed version of our experience on Our Journey. 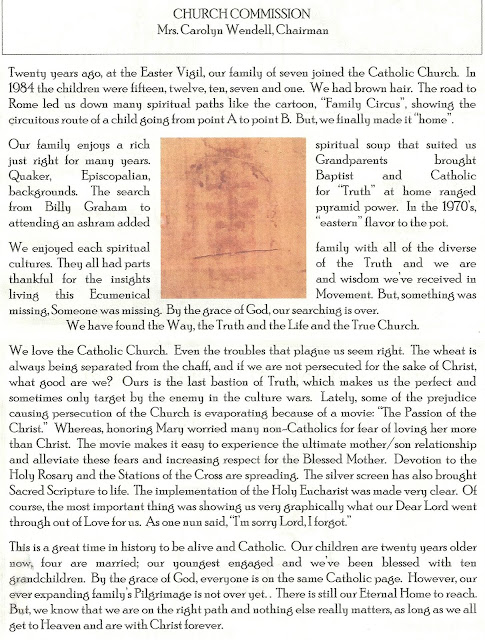 After one moment when I bowed my head
And the whole world turned over and came upright,
And I came out where the old road shone white,
I walked the ways and heard what all men said,
Forests of tongues, like autumn leaves unshed,
Being not unlovable but strange and light;
Old riddles and new creeds, not in despite
But softly, as men smile about the dead.

The sages have a hundred maps to give
That trace their crawling cosmos like a tree,
They rattle reason out through many a sieve
That stores the sand and lets the gold go free:
And all these things are less than dust to me
Because my name is Lazarus and I live.