Dear Advocates for Life, Over seven thousand citizens of Oregon in downtown PDX at the Roe VS Wade Memorial Rally and virtually ignored by the media. We truly are the invisible people...the marginalized...the shunned...the CENSORED. Many have asked what to do, how to contact the media, so here's a first step: Let your voice be heard. Here is a link to make things easier for you to contact Oregon media. http://bluebook.state.or.us/cultural/media/media.htm Newspapers published in Oregon Selected periodicals published in Oregon Oregon radio stations Oregon commercial television stations Oregon public/educational radio and television stations God Bless you and yours, Carolyn Beloved, do not look for revenge but leave room for the wrath; for it is written, "Vengeance is mine, I will repay, says the Lord." Romans 12:19 www.vocalnews.org VOCAL Voice of Catholics Advocating Life PO Box 458 Sublimity, OR 97385 503-769-4767 Member of the Catholic Media Coalition "In line with the Church, on-line with the World".
Posted by VOCAL at 7:34 PM 0 comments 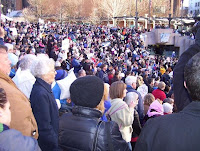 Dear Advocates for Life, History was made at Pioneer Courthouse Square this Sunday, when over seven-thousand cold, but warm hearted pro-lifers gathered for Oregon Right to Life's Annual Roe VS Wade Memorial Rally. There might not be any media coverage, so enjoy these pictures sent to me by Cheri Crocker of Salem. Gayle Atteberry, executive director of Oregon Right to Life, spoke to Christan News Northwest before the event: "We see God's sovereignty in this.....Our board made the decision that we wanted to make it bigger and take it to the heart of downtown Portland. They need the message of life more than any other city in the state of Oregon. We made this decision early in the year, but in retrospect, with the results from the election, I'm happier than ever that we made it." Coming into Portland did bring a little confrontation, but this too was expected and showed stark contrast to what the saving the pre-born children is all about. Maybe hearing the speakers made a small conversion in their conscience. One sign said "God is invisible"...held by a young woman...let's pray that she "saw" him in those at the rally. God Bless you and yours, Carolyn "Poor human reason, when it trusts in itself, substitutes the strangest absurdities for the highest divine concepts." Saint John Chrysostom, Doctor of the Church www.vocalnews.org VOCAL Voice of Catholics Advocating Life PO Box 458 Sublimity, OR 97385 503-769-4767 Member of the Catholic Media Coalition "In line with the Church, on-line with the World".
Posted by VOCAL at 7:25 PM 0 comments

Bishop Robert Vasa, "Those who say they love God, but back abortion, are liars."