Video How Catholics Are Involved in Misguided Alliance Regarding Refugee Settlement.

Through the grace of God, our recent 40 Days for Life Campaign in Portland, OR had so many blessings!

We had 197 prayer vigil participants from 31 different churches, and 5 saves......that we know of! May God Bless all who prayed with us, on and off site! And may

God Bless all the families and single women we encountered, no matter what the outcome. Praise God for LIFE! 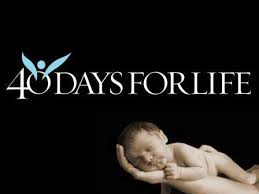 Dear friends,
I thought PP would be closed today as it is Veteran's Day. Wrong!
I talked to a 30 year old girl ("Kathy") who seemed to know what we were about when she came out. She looked overwhelmed as she told me that she was addicted to methadone, and that she had an infection. She said PP wanted to give her antibiotics but were reluctant to do so as she was pregnant. She made it sound like they were offering abortion as the best alternative, but she didn't really want to have one. Kathy wanted to get clean and have the baby, but she wasn't sure she could as apparently getting weaned off of this drug takes time, and abrupt changes would hurt her, and the baby. She said she was homeless, but she looked fairly well kempt. She needed information about drug addiction and pregnancy. I told her I would get on the phone and try to find out some information.
Just then a mean-sounding man called out to her from the door "They are calling your name!" Kathy indicated just a minute, but he called out, more insistently "They are calling your name!!" He gave me a stern look after she went back inside. I wasn't afraid of him, but I was afraid of how he might influence her. Steve and Barry, Ignacy and Mimi and I PRAYED. Kathy stayed in there SO long.....
Later, I signaled for a gal ("Jean") I saw in the waiting room to come out. She looked at me and shook her head "no".
As Mimi was helping me to gather my things and head to the car so I could go to the noon Mass, Jean came around the corner. I asked "You sure you don't want any help?" She wavered, saying she wasn't sure what she wanted to do.....that she had a 6 month-old girl, a 2 year old boy and a 14 year old boy. She was 11 weeks along, so I gave her the precious feet pin. Then I showed her the fetal model of a 10 week old. She believes in God, so I reminded her that she would have to stand before God one day, and that her baby was a precious GIFT from him, and that s/he was irreplaceable! She finally relinquished that she "wouldn't have an abortion today".
In the middle of our conversation, Kathy came around the same corner. I asked her what happened and she said "I didn't do it!" I didn't see the mean guy; I don't know who he was. PP had actually ended up referring Kathy to OHSU for treatment. But she was very grateful for the phone number that I gave her to "NW Prenatal", who deal with complicated pregnancies, esp drug and alcohol-related ones. So she left!
Jean and I continued our conversation. She asked about the bus line. I asked if she needed a ride and gave her one. On the way to the place where she was living (with her Mom), she said her boyfriend didn't want her to get the abortion, and neither did his Mom (they had driven her there). But HER Mom did, apparently b/c she and all her children were living with her. When she tried to call the boyfriend to come and get her, her phone died. When she texted him, no response.
Jean told me a lot of good information about what goes on inside the PP. She was surprised that both the person who asked about her medical history (after the intake), and the woman who did the ultrasound, were midwives. She expressed concern that midwives were involved with abortions. I asked her if they would let her see the ultrasound, and she said yes, that she was asked, but didn't want to see it. The screen was turned away, but at one point, the midwife took a picture, and Jean looked and saw her baby, just the head and trunk. But once she saw that, it got her thinking and doubting......I asked her if PP tried to push abortion on her, and she said no. Jean said that once she seemed to hesitate, the midwife said she could take her time, that it was all about choice. I thanked Jean for helping me with so much information. She offered me gas money, and then offered to buy me something at KFC. I took her up on that 2nd offer! You have to eat delicious really-bad-for-you chicken some time! Besides, she wanted to treat me.......
As we parted, I told her to call me any time, not be afraid to access the resources, and treat herself good--because after all, she's pregnant!! She told me to do the  same. I don't think she'll be going back to PP

.
We have never had, through the grace of God, two saves in one day. But today was the day !! Thank you God!
Therese Ruesink
Abortion hurts the soul and impacts the heart at the deepest level. Knowing and respecting that reality, we should expect some persecution.
Shawn Carney 2015
Posted by VOCAL at 4:47 PM 0 comments