To Whom it may concern, (from anonymous Oregon Catholic priest),

While it would be tough for me to weigh in on an internal Catholic issue, I can have a personal opinion overall.  The biggest problem I have is that if you believe what you claim to believe, why would you put time and energy into an Organization that actively works against that belief?  EMO, clearly and unequivocally, has the position that gays and lesbians are not engaged in unnatural sexual relations, essentially they hold homosexual behavior to be OK. Last time I looked, the Catholic Church still, and rightly so under the bible, believe homosexual behavior to be unnatural and immoral.  While many of their programs for social justice are great, the Catholic Church doesn’t need to belong to advance those noble causes they do promote.

It is one thing to love and tolerate all sinners, it is quite another to say their sin is ok and free of consequences.  By belonging to EMO the Catholic Church is compromising their own values, for what benefit?  Whatever benefits they believe come from membership can easily be obtained other ways without giving tacit approval to the homosexual lifestyle.

I am all for having a loving and open dialogue with other Christians about our different interpretations of scripture, but why do I have to join their organization?

Of the five (5) largest denominations in Oregon (by number of members in the State), (Catholic, Mormon, Assemblies of God and Evangelical Lutheran and Foursquare), the Catholic Church is the only one who chooses to be a member.  In looking at the statistics, the EMO, absent the Catholic Church, represents a very small minority of Oregon Church goers, about 10%.  Here is the link to that info,
http://www.thearda.com/mapsReports/reports/state/41_2000.asp
The bottom line is, they have an important belief that runs counter to Church doctrine; and without the Catholic Church, they really represent a very small number of Oregon church goers.  So why get involved? 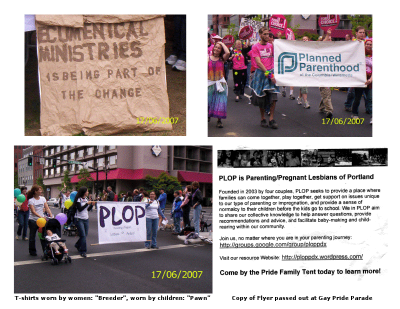 This is a reminder that we agreed  at our April meeting that a concrete action we would take as a group  is to walk in the Pride Parade. We will be with the Coalition of  Welcoming Congregations, more specifically with the Catholic Coalition. Hopefully we will have enough folks so that we can carry  our CTA banner as well as the parish banners! I'll make sure we have  our brochures available at the information table at  the end of the  parade. We gather in the North Park blocks around  11:00 am. Our parade  slot is 60, so we will have a bit of a wait  before we step off! Folks  are welcome to join in along the route  too, if they can find us!! It  is a fun and enthusiastic group! Hope several of us can be there!
Look for the banners of St Frances and St Andrews and join the fun around 11:00 AM Come and seek justice for all people of God.
Al Nissila  503-460-3455  (Call to Action women's "ordination" Group friendly with many Catholic parishes.   This is common knowledge in the heirarchy and let be allowed even though we are bankrupt by supporting mortal sin.)

In His Name....four women priests" and other dissident Catholics as"Fr." Roy Bourgeois who was excommunicated for agreein

In a Nutshell - "Welcoming Communities" is code speak for homosexual friendly.  Whereas we don't promote homosexual activity as in the "Gay Pride" parade, we pray for all people who are being lead astray and being used as pawns by the master of deceit.

Environmental Justice of Which we are a BIG part.

Economic Justice all the "Justices" except DIVINE.
SAUL ALINSKY type organizations are funded through EMO.

Here is Saul Alinsky’s dedication to his own book: “Lest we forget at least an over-the-shoulder acknowledgment to the very first radical: from all our legends, mythology, and history (and who is to know where mythology leaves off and history begins — or which is which), the first radical known to man who rebelled against the establishment and did it so effectively that he at least won his own kingdom — Lucifer

Ecumenical of Oregon member churches host the "ordinations of our g with these quasi events and his AM Church ideas.  snuck in - Fr. Roy Bourgeois in action (Call to Action)

EMO is an ultra progressive organizations of ultra progressive churches that the Archdiocese of Portland is a member and has been for many years. They are for abortion, homosexuality activity, global warming, and our schools teach the Earth Charter, a one-world theory that is anti-Catholic and pro-abortion at the least.

Connections with the Archdiocesan Office of Justice and Peace who "needs" this group to make sure that Oregon Catholics remain funding evil through them.  Most activities of this Office takes it cue from this group and their alliances. and are reflected in the monthly emails about environmental justice, economic justice, food justice, and all the other Justices that don't include the Divine Justice of Our Lord Jesus Christ.

The funding of this office in my belief and many others as a waste of money.   The director is learning on the job about human love of our future, the unborn.

The faithful laity has been unable to remove our alliance with EMO giving them credibility and funds.
Archbishop John Vlanzy puts it this way after another lay attempt to remove our relationship with EMO.

Evil Powered by the Catholic Church