"Too Many Children" aka "Sustainability" taught to Western Oregon Catholics. 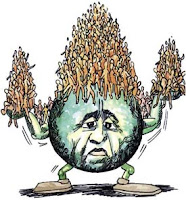 "Too Many People" , the April 2011 Newsletter from the Office of  "Life", Justice and Peace, was very disturbing and made the link between "sustainability" and eugenics.  This was the "pro-life" handout from the Archdiocese to those at the Oregon Right to Life Conference and Oregon Catholics.

Look up any link regarding "Sustainability", no where does it mention Trust in the Creator.  Office of Life, Justice and Peace newsletters       Catholic Sustainability Network. Matt Cato mcato@archdpdx.org

FROM THE OFFICE: "TOO MANY PEOPLE"

"Sometime this year the world's population will reach the seven billion mark. Many environmental groups advocate for population control as a solution to climate change. Here in Oregon, The Oregonian printed a front page guest piece on its Opinion section about overpopulation being the root cause of our environmental problems. (Treading on a Taboo, Jack Hart; The Oregonian, June 15, 2008)

Yes, all things considered, overpopulation is an environmental problem when we consume too much of the world’s resources.

For the first time, at the Oregon Right to Life Conference this Spring, many of us met Matt Cato, director of the newly expanded name, Office of  "Life", Justice and Peace.  It was also the first time in decades (or ever) that the Archdiocese of Portland in this capacity, had stayed for any complete Oregon Right to Life Conference.  Rev. Timothy Mockaitis the Associate Director was not present.  Kudos to Matt.

(Last year in 2010 the Pro-life community hosted a breakfast for Matt at the Oregon Right to Life Conference.  He refused to let me attend but at least he did.  That's okay there were lots of good folks there.)

First of all let me say that Matt is a nice man.  He just doesn't understand about honoring the unborn as the primary life issue.
There are  dedicated pro-lifers who now attend Matt Cato's Respect Life Core Group.  They're faithful to the Church and Her Teachings.  We are hopeful.

$40 million dollar line of credit for Archdiocese of Portland...Stop your behavior, it's our money!

Dear Advocates for Life,
The "Campaign Confusion" raises its ugly head again.  Just as the Chief Financial Officer for eons, Leonard Vuylsteke, CPA CCM  is leaving before the new Archbishop comes.  Just part of a shake up that assures the progressive movement is alive and well in the Archdpdx.
Help Wanted: New Director of Finance for Archdpdx

This happened just a month ago.  From a UK Newspaper.
"The MoS (manual of standards?) has also discovered that the loans are now being quietly repaid. In a revelation that will prompt further questions about whether the Vatican is behind the international deals, the supposedly-indebted dioceses have begun to pay off the AIB debts with money from other, unnamed, institutions.

Just last month a $40m line of credit to the Diocese of Portland in Oregon was taken over by an un-named creditor.

Bob Krebs, a spokesman for the diocese for many years, declined to name the new lender. Asked why AIB had been used to help fund its abuse compensation cases, he said he did not know who 'found Allied Irish for us'."

With the Archdiocese of Portland's curriculum's secular and suggestive focus being taught through our children.  It is reflected in the "indelible ignorance" that is trying, but never will overcome our True Faith with Devotion to Christ Jesus and His servant Pope Benedict XVI.
Posted by VOCAL at 9:55 PM 11 comments

"Are you a Democrat?" From job interview at the Catholic Sentinel

This statement came from a person who didn't get the job. He was NOT a Democrat. Who knows if he would.

The Catholics in Oregon are used to taking a backseat to the Democrats who run the show at the Archdiocese of Portland. Pro-lifers are treated as not very bright or "with it". We are used to this and pray that the Lord Hears out prayers and answers us (in the affirmative please Lord). When the campaign heats up for President just watch the "Faithful Citizenship" booklet as the only one allowed. We only listen to www.emoregon.org . Sad. Cream always rises to the top. We remember that and it give us hope.
Posted by VOCAL at 5:08 PM 4 comments