IN THE 2016 Catholic Directory the SFCC is STILL posted.  Mary Jo Tully, as chancellor, was in charge of the religious communities of women.  We will see if her departure helped correct this direct  attack on the Roman Catholic Church.

As of March 2015 the  Sisters for Christian Community SFCC, is still in the Catholic Directory for the Archdiocese of Portland.  "Sisters" that belong to an Order that HAS canonical approval could very easily identify themselves as with that order and not SFCC.  They are not approved by Rome and could lead some well-meaning Catholics away from True church teachings.

Their website says in part: "By 1995 SFCC defined itself as a "prophetic-ecclesial community" driven to "speak the truth of love and grow in the maturity of Christ"      (Eph 4:15). SFCC continued to understand itself to be a community of consecrated women who are self-determining, self-regulating and self-governing and hold a common goal: that all may be one-the Christ prayer for unity and collegiality. To SFCC it is clear that only the Christ-prayer of unity makes all independence and collegiality possible and productive. Thus it is this Gospel prayer that forms the heart of the SFCC common spirituality, while it challenges each SFCC to take the uncomfortable risk of being prophet in her home town. Founded originally to concern itself with the restructuring of a hierarchical institutional Church, SFCC moved progressively toward what it came to understand as a "ministry of presence."
__________________________________________________________________

When Archbishop Vlazny was appointed our spiritual leader, along came a group of women approved by him. This group is called the Sisters For Christian Community. We have many in working in our Archdiocese.  FYI - Archdiocese of Portland phone number 503-234-5334 - Office of Religious Communities - Mary Jo Tully , Chancellor mtully@archdpdx.org (See below for names.)

They are non canonical, meaning they are NOT approved by Rome.


Non-Canonical–adjective
1.  Not included within a canon or group of rules.
2.  Not belonging to the canon of Scripture.

It doesn't take long to see their negative feelings on the Vatican.

If we go deeper we see "women's rights" which addresses agreeing with the acceptance of abortion and women priests.

We have four "women priests" in Oregon sending the wrong message. Nice friendly ladies, working in some capacity for the Catholic church here, but leading people astray aka hell.

'The most radical of the new nuns have abandoned their orders to form "noncanonical" experimental communities outside the reach of church authority. But they do not consider themselves "ex-nuns."

A free-form, geographically dispersed group (32 states, Canada and England) called Sisters for a Christian Community (S.F.C.C.) was founded in 1970 to "experiment and pioneer new forms of religious life for the 21st century."

Essential to the undertaking, says Founding Sister Lillanna Kopp of Portland, Ore., is the elimination of the bureaucratic, authoritarian structures that have driven American nuns out of traditional religious orders by the tens of thousands since the Vatican Council closed in 1965.

Since that year, the number of U.S. nuns has dropped from 180-000 to 150,000—far more than can be accounted for by normal attrition. "We must be a pilgrim people on the road, unencumbered by luggage," says Sister Kopp, a sociologist and author, who left her order in 1969.

"Marble mother houses are what destroyed the old orders."


GREAT NEWS!! The Vatican is conducting an Apostolic Visitation of Religious Communities. It may be that SFCC is off their radar screen because it is non canonical. But we can make sure that if we're being led astray by the Archdpdx they will know.

Dearly beloved, believe not every spirit, but try the spirits if they be of God: because many false prophets are gone out into the world. 1 John 4:1
Posted by VOCAL at 9:19 PM 0 comments

Labels: CCHD, The None Story, Throw the Poor Dog a Bone

Bishop Steiner's "Bubble Blessing" Blunder of "MOTA" and their Labryinth

We have a problem with our auxiliary Bishop's discernment of late. There are a myriad of questions regarding celebrating "mass" with Mission of the Atonement (MOTA); their so-called Catholic and Lutheran church and the homosexual promotion of  Community of Welcoming Communities after our Archdiocese was bankrupted because of this. Community of Welcoming Communities
Here's the letter I sent him in May 2010:

Just a question as to your take on Mission of the Atonement. I saw that you blessed the labyrinth and know that this is a mixed Catholic/Lutheran church.

Do you know if the retired priest consecrates with the Lutheran minister and why is this not in the Archdiocesan Oregon Catholic Directory as a valid church.

Since there has been no reply...and it's still going on, now it goes public.

What Mission of the Atonement says about the Roman Catholic church from staff person Susie Snortum. "She identifies herself as Presbyterian, but loves the blurring of denominational lines in the interest of worshiping our one God together." 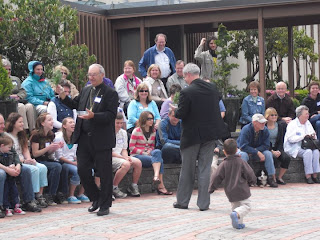 NO FEAR OF LIVING AS HE WANTS.  HE'S ABOVE THE TEACHING OF THE CHURCH?
Some questions: why is this needed for unity when it means watering down our True Faith? How does this "priest" do the mass with the same text as a Lutheran? This is NOT the body and blood of our Lord Jesus Christ so why is Bishop Steiner approving of this fiasco? Why does this get any attention of all?

Why does the Archdiocese allow this? Why does our Bishop "bless" a less than Christian labyrinth as a wonderful thing when it leads people away from the True Faith? (more coming your way about the labyrinth and its danger). Why is this NOT in the Catholic Directory, but encouraged, since it's still here?

These are a few examples of the "rotten fruit of this spirit".. A degradation of our clergy, and values.

"Welcoming Congregations" aka pro-homosexual churches traps from Satan, for those unaware

Catholic/Lutheran
Mission of the Atonement, Beaverton, OR

It is not necessary to join MOTA to have an "Ecumenical" Church. Just have a Roman Catholic that stands firm in the faith with lots of friends outside the Church. We don't have to blur the Truth to make friends or to believe we really are better than plain old Roman Catholics.  It's true Synergy at it's best.


"Let no one deceive you with empty words, for it is because of these things that the wrath of God comes upon the sons of disobedience. Therefore do not associate with them, for once you were darkness, but now you are the light in the Lord; walk as children of light (for the fruit of light is found in all that is good and right and true), and try to learn what is pleasing to the Lord. Take no part in the unfruitful works of darkness, but instead expose them." (Eph 5:6-11)
Posted by VOCAL at 10:57 AM 23 comments