During the year, diverse letters to the editor are printed. That's the bone.  But the Catholic Sentinel shows it's hand during the elections.  In the letters to the editor, candidates are promoted that support abortion and active homosexuality. I say promoted because there is no editorial comment or disclaimer on what it means to vote as a Catholic.

Voter's guides from Oregon Family Council and Oregon Right to Life are not "allowed" in most of our churches: we feel like there's a war with the Archdpdx. We are indeed the "poor dog". 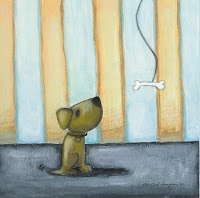 The Catholic Sentinel has such a low subscription rate that it is being funded by the Archbishop's Annual Appeal to keep it afloat.  The El Sentinel, the Spanish language Archdiocesan paper is given out free of charge and has been for a long time.  There is a liberal bent to this paper too and there is definitely an agenda. It also advertises for Susan B. Komen Foundation who gives money to Planned Parenthood that focuses on minority abortions.
For one woman's great explanation go to Why I can't give to Susan B. Komen

So these "Catholic" newspapers are given to our churches "free",  passing on their progressive bent to unsuspecting Catholics with our own money.  For some reason we subsidize a dying newspaper and their employees.  Low subscription rates were probably the catalyst for this action. It seems the illusion of having a great newspaper is needed.  Below is information to educate.

El Centinela  editor Rocío Rios Niño was born in Colombia, South America. She worked six years at the El Espectador newspaper in Bogotá, Colombia’s major daily newspaper. It is the oldest newspaper in Colombia. Since its first issue to the present its motto has been "El Espectador will work for the good of the country with liberal criteria and for the good of the liberal principles with patriotic criteria". It was initially published twice a week, 500 issues each. It defined itself as a "political, literary, news and industrial newspaper"She worked three a half years doing television reporting on Colombia’s top television station, Caracol news. She came to the United States in 1998 to learn English and became editor of El Centinela, the Catholic Sentinel’s Spanish-language sister newspaper in 1999.
+++++++++++++++++++++++++++++++=
Good News. Catholics nationwide are getting behind pro-life, pro-family candidates more than two years ago, voting for the lesser of two evils, if needed. Mentor, Father Frank Pavone, director of Priests for Life, is incremental in his approach to changing hearts and minds. The Faithful Citizenship USCCB booklet isn't cutting it for thinkers.  Now it's time to pray, possibly holding our nose to save at least one baby for sure.

Here are links to a voters' guide if needed. Oregon Right to Life Voter's Guide   Oregon Family Council (can't find download for OFC)  Gubernatorial candidate Chris Dudley has said he will support parental notification, ending state funding for abortions and partial birth abortion.  The ORTL guide doesn't reflect all subsequent conversations of people you would trust.  Dudley has a pro-life reputation to the pro-aborts.  He has his foot in the door to the Culture of Life. His fate is sealed if he wavers.  John Kitzhaber is pro-abortion and supported by NARAL.

Remember the Vatican trumps the USCCB, the Archbishop and priests on everything in the Church.  A non-perfect pro-life candidate can be chosen over a more pro-abortion one.  Not to vote is voting for evil.  Go to the Vatican website for the Catechism if needed for backup.

Rome's Cardinal Burke on voting for Catholics.
Posted by VOCAL at 7:47 PM

I comment from time to time as I have been pushing noses with heretic priests and reporting them to the diocese for … 30+ years – to no avail.

While I have supported your point of view, I have sometimes wished you could communicate it in a more effective way.

As I read this last newsletter from you I see you have received a gift from Our Lady and perhaps some patron saint. Excellent EXCELLENT job!

Perfect timing too, as I was going to beg off of my contribution to the diocese this Sunday – and didn’t know quite how to word it. Our pastor is orthodox – a real Catholic – and he said unless we put a reason for not contributing the diocese will contact him to get in touch with us personally! He said he supports the seminary program (I guess more good men are sneaking thru) but he will feel uncomfortable if he has to call us and ask why – if we choose not to donate and don’t put a reason.

Hey – I heard Bishop Vasa and Michael Voris are writing articles for the Wanderer! Guess I’ll have to subscribe to it. Ask the diocese if they will provide the Wanderer free for us!!!

Best Wishes, God Bless, and through the prayers of the Mother of God may our Savior save us all!

Thanks for your insight and perseverance and honesty.

There is a big disconnect with the laity from the Archdpdx. It is quite like the disconnect of the federal government to the citizens. Both of these are run by liberal progressives. They both get their walking orders from Saul Alinsky coming from Chicago.

God Bless you, my friend.

Thanks for this great info. Just a note – the Oregon Family Council guide WAS passed out at St. (VOCAL, name withheld to protect another priest) a couple of weeks ago.

Yes, the Sentinel is trying to be all things to all people – while having no regard for the truths of the Faith.

These people have to realize that we are not the enemy. They are in league with the the true enemy and for some reason can't, or won't see it.

We have to pray for them before it's too late and they miss the Truth of Christ on earth and heaven.

If we vote for a pro-abortion republican candidate what is to keep the party from ignoring pro-life republicans in future races. I am afraid if Dudley wins we will see more and more pro-abortion republicans. What little we gain for the few years kitzhaber is governor we lose for many gubernatorial races in the future and perhaps national races as well. Already this year we have another pro baby killing republican going against Wyden.Perhaps if a enough of us pro-lifers stand our ground and vote for the pro-life candidate the republican party would stop falling way short on the most important issue facing our beloved country and her people. This republican is voting for Greg Kord.

I understand your point. The incremental approach saves at least a few babies while the Holy Spirit works on the misguided politcans. We all live in a world where evil abounds. Everyone has to follow his/her own conscience.

I'm voting for Dudley. This is because he is a viable candidate and does have some pro-life conscience...he's not perfect by any stretch of the imagination but he knows which side his bread is buttered.

The success of the pro-life candidates and the turning tide to the US towards life and common sense makes me hopeful for the future. I have 20 grandchildren and one adopted, saved from abortion by a parental notification law. It's baby steps but saves some lives.