"Discover and Re-discover GK Chesterton. Common sense for the world's uncommon nonsense."  St. Joseph Catholic Church of Salem is honoring the "Apostle of Common Sense".  He should be a must read for everyone who can read.

GK Chesterton lived a remarkable overflowing life. Men especially would like to know that he loved a good port and a cigar..so in his honor they'll have about four different wines.  You'll be waited upon with food and drink seemingly never ending. Dale will answer any questions and there is a "special guest".   Quite a wonderful evening.

"Fallacies do not cease to be fallacies because they become fashions." - ILN, 4/19/30 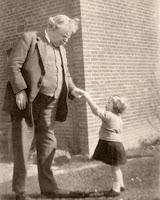 "Impartiality is a pompous name for indifference, which is an elegant name for ignorance." - The Speaker, 12/15/00

"What embitters the world is not excess of criticism, but an absence of self-criticism." - Sidelights on New London and Newer New York


Here's the info in St. Joseph of Salem's own words.
Its time again for the much anticipated
Third Annual G.K. Chesterton Steak and Wine Dinner!

This year’s event will be held on Saturday October 23rd
at 6:00pm in the parish center. Once again we have invited back  Dale Ahlquist, President of the American Chesterton Society and EWTN host and a special guest.

Reservations are now being accepted by calling Rolando Moreno at the parish office (503) 581-1623.

"Tolerance is the virute of a man with no convictions."

Love it and believe it...
Here's another one.

"Let your religion be less of a theory and more of a love affair."
Gilbert K. Chesterton

This evening was the best yet. The special Guest was the actor who portrays GKC so beautifully so we got an experience of what how he dressed, his humor and wisdom. The house was packed and a wonderful place to be. Hope you can jump on it next year.