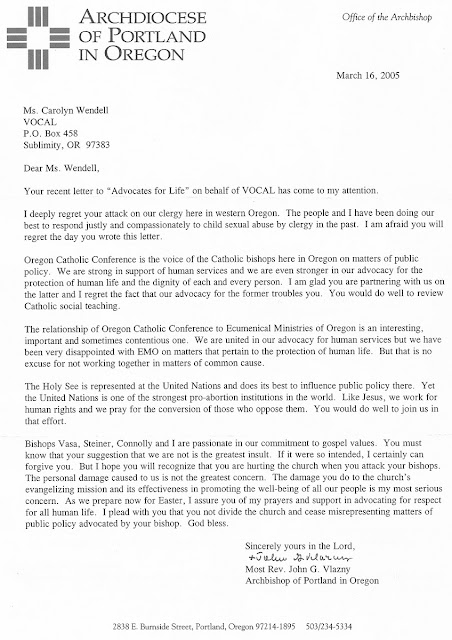 The Archbishop is "disappointed" with EMO regarding the Life issues.....etc. Do we need them with their pro-abortion doctrine? Don't we see this as a line we will not cross with an organization that is changing us and we're not making a dent with them?
Here is a letter that I received with concern over our involvement with Ecumenical Ministries of Oregon and their leading Oregon Catholics away from the Faith.
To Whom it may concern, (from anonymous Oregon Catholic priest),
While it would be tough for me to weigh in on an internal Catholic issue, I can have a personal opinion overall. The biggest problem I have is that if you believe what you claim to believe, why would you put time and energy into an Organization that actively works against that belief? EMO, clearly and unequivocally, has the position that gays and lesbians are not engaged in unnatural sexual relations, essentially they hold homosexual behavior to be OK. Last time I looked, the Catholic Church still, and rightly so under the bible, believe homosexual behavior to be unnatural and immoral. While many of their programs for social justice are great, the Catholic Church doesn’t need to belong to advance those noble causes they do promote.
It is one thing to love and tolerate all sinners, it is quite another to say their sin is ok and free of consequences. By belonging to EMO the Catholic Church is compromising their own values, for what benefit? Whatever benefits they believe come from membership can easily be obtained other ways without giving tacit approval to the homosexual lifestyle.It is one thing to love and I am all for having a loving and open dialogue with other Christians about our different interpretations of scripture, but why do I have to join their organization?
Of the five (5) largest denominations in Oregon (by number of members in the State), (Catholic, Mormon, Assemblies of God and Evangelical Lutheran and Foursquare), the Catholic Church is the only one who chooses to be a member. In looking at the statistics, the EMO, absent the Catholic Church, represents a very small minority of Oregon Church goers, about 10%. Here is the link to that info,
http://www.thearda.com/mapsReports/reports/state/41_2000.asp
The bottom line is, they have an important belief that runs counter to Church doctrine; and without the Catholic Church, they really represent a very small number of Oregon church goers. So why get involved?
In His Name....
Things need to change. We are better than this.
Posted by VOCAL at 10:31 AM

Caroyn,
The archbishop does NOT address 'the issues' in his letter to you. He should have been a politician! Everything is so vague! He goes along with the times and has made no effort at all to separate us Catholics, because we ARE different! We should not be part of any other organization just to be accepted. We ARE ALWAYS going to be different. He is very vague while he misrepresents us as Catholics. Our values are not to be mainstreamed into this Protestant attitude of a 'feel good church'. How can he be insulted? What a cop-out to shift the blame back to you! You are speaking truth! I can not wait until he retires! He thinks like a heretic and ought to become a Protestant! He is a Judas within. As Fr. Sam Pietro used to say, "Some are Catholic in title only" Amen to Fr. Sam!

Good work by the way Carolyn!!! You are a holy, intelligent women and I respect you very much!

wow wow wow- you are a fighter---- and you LOVE priests and bishops (to a fault?) so I am "disappointed" he would say that

Thanks Priests Wife. You know how much I respect priests and bishops. When things are so blatantly wrong it is our responsibility to bring things to the light that confuse the Faithful and encourage people to degrade the church.

I watched KATU that evening, and their lead in implied Catholic sponsorship of the parade (along with Alaska Air), and they specifically showed the St. Andrews group with their banner marching through the streets.

Thanks for your observation. They won't even try to learn True Church teaching when it comes to abortion and homosexuality. It's those two issues that reveal their hearts when they fight for those two issues.

What a nightmare this is! Joy says, "We have a hierarchy that loves to tell us what to do". Apparently our hierarchy doesn't tell us enough about what we must do!!!

That's a good one. These people don't realize that we are trying to help their mortal souls. They have such a problem with authority. Maybe that's part of the problem.

thanks for sharing!Women "priests" or being against the Pope is actually encouraged by the status quo, like the parade...

Thanks Alyssa for bringing truth to light. Those who call themselves Catholic try to tear the church down, sadly those who are supposed to defend the church.