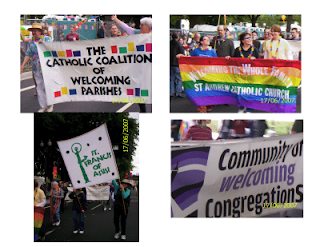 
Mary Jo Tully, our Chancellor freely agrees with EMO, sitting on their Board giving them credibility and actually using them in dictating our Churches direction on many levels. Oregon Catholics are harmed by our affiliation with Ecumenical Ministries of Oregon. To belong to this organization costs Catholic money without supporting Catholic values. (to be continued)
Posted by VOCAL at 11:42 AM

Just a FYI: Several of the links-- esp the one to the video-- do not work. Has happened before (maybe for my MAC usage not a PC) so it might be helpful if you also post the actual link itself in case the embedded one does not work

Hello,
The links work on my website. www.vocalnews.org I just realized the video didn't work. I will send out the proper links in Part two, both emails to VOCAL and my next post.
Carolyn

Dan,
I understand your frustration. "Silence implies consent" but with all this heresy sometimes it seems almost impossible to grasp hold of.

We must cut off the Serpent's head and Ecumenical Ministries of Oregon is that head.

Then making sure that our hard earned money supports the Catholic life and not anti-Catholics.

I remember Mother Teresa's words, "Faithfulness, not success." If people made one phone call or mailed a letter defending our Church we would have a Culture of Life

It's amazing this is allowed to go on. In Mexico there is nothing like this!

Isn't it amazing that it has gone on for so long. Their reasons for staying with these groups would make you laugh.
If we look at these websites, no where is Our Lord mentioned and abortion is never elevated to be valued as the death penalty. One is never allowed the other can be allowed.
At least it soothes their liberal soul.

I don't know if you can answer this; is the papal nuncio aware? I do not have documentation that they
require- I can journal on events that I participate in and conversations but researching and storing the
documents not my strength at this time.

See the faithful work within the system where the unfaithful utilize mobs, intimidation, and the devil
tactics... I pray that God opens up the heavens and knocks them over with His rainbow!

We need to pray for the sanctity of families.

The papal nuncio is going to be aware. I would suggest that not "doing it right" NOT be a stumbling block.
This is why I think the Lord would turn over tables :-) He's not the pansy they make Him out to be.

Have you ever sent notice to the hierarchy (not local) who might be able to intervene? What about notifying Fr. Cihak (sp) in Rome?

When Archbishop V. retires will Ms. Tully retire too?

Well, the Financial Director, Leonard Vuylsteke, is resigning as of September as is Dennis Keenan, the Director of Catholic Charities. They have both been at these jobs for decades and now that we have this huge Capital Campaign and a $12 million dollar Catholic Charities building was just opened. (it is not just for Catholics. It's main focus is helping illegals in this country.
So...I don't know if Mary Jo Tully would retire when AB Vlazny does for sure. I honestly can't see a devote new Archbishop would keep her.

I truly believe that it would make a tremendous difference to have someone else. She has so many directorships that it causes the Pastoral Center to have a hardness of heart.

however, u do know that st phillip of Neri is to-- im sure -- what can we do-- can we go put Miracalous medals around these churchew and st benedict -- hwo about a group doing this?
take care

I know. Mary Jo Tully let the head of a gay organization (a priest) speak at St. Philip Neri's. This meeting included teachers from Catholic Schools and priests who are part of the lifestyle.

This makes me so upset! I'm a practicing RN in Portland, & the sorrow this lifestyle brings into families is horendous. But we have to 'understand' it & teach caregivers of AIDS patients not to bring their values into their work, as I was told today.
It's one of the many reasons I'm a traditional Catholic. I won't support the works of this archdiocese, but rather spend my contributions on the restoration of the true Faith.

I hope all is well. Thanks for your efforts, Carolyn!

Wow. You folks would have felt right at home during the Inquisition... but then why, as good Christians, would you want to light candles when you can light bonfires with people on top of them?

It's ironic that you would post Mother Teresa's quote - "Let us more and more insist on raising funds of love, of kindness, of understanding, of peace." Then again, I have to guess that you think irony is something that rusts in the rain.

This is just wrong, from pictures Ive seen of Gay Pride Parades no kid should even go to it. On Mother's Day & Father's Day should be activities that both parents and their kids can go to. If the Churchs there are going against teaching of the Catholic Church, I would stop titheing and look for a CC that doesnt go against the CC teachings.

Great word picture in your last sentence. Your sense of humor was not lost on us.

However pointing out the errors of Catholics participating in the homosexual parade, which is against Church teaching and homosexuality in 2011 does not equal the Inquisition of hundreds or a thousand years ago.

As far as the Mother Teresa quote. This indeed makes perfect sense, just add the last part of the quote."Money will come if we seek first the Kingdom of God". This is in reference to the seemingly endless collections at church using finances for questionable projects.

This is a site for Catholics. If you are a Catholic, continued education in the Faith might be worthwhile.

After watching the video I am so encouraged to see the Portland Catholc community of St Andrews has a Christian heart of charity ...like Jesus the Christ. I am a heterosexual Roman Catholic that believes in full equal rights...not judgment. Love one another.