With all due respect to the Archbishop, the "Sharing our Faith, Shaping Our Future" Capital Campaign regarding where the money goes is confusion or collusion.  Your guess is as good as mine.

There were two problems with this for Oregon Catholic priests and laity, some of the categories would be the same with monies combined, but we were told they would have oversight, so not to worry. 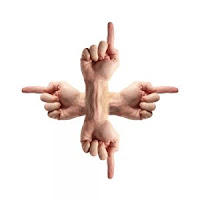 Well, worry they did and it was changed to cancelling the Archbishop's Annual Appeal, sort of.
Here is the latest.
"The Capital Campaign chugs along building momentum throughout the spring. Now that you have a better picture of some of the challenges we face in providing for the education of our future priests, I hope you will make a pledge this month, if you have not done so already. In recent years we have funded priestly formation through the annual appeal and funds that were restricted for seminary education. Without an appeal this year and with only enough funds left in the restricted account for the education of four or five of our men, I am obviously counting on your willingness to pledge and make payments as soon as possible. We are all responsible for “sharing our faith and shaping our future.” But we truly need well trained priests to take the lead. Please help me send good pastors into the fertile fields of western Oregon!"

From the same article.....
No, I think they're using their discernment on this one, there's no misunderstanding.  Please don't update us anymore.  How courageous of them being good stewards of The Lord's finances.

With this under sight we need transparency before we give to campaigns conducted by staff that thinks we are a means to an end.  The Archdiocesan hierarchy does not mean spiritual anarchy.
"My little children, let us not love in word, nor in tongue, but in deed, and in truth."
1 John 3:18
Posted by VOCAL at 11:16 PM

How very sad that you choose not only to refrain from supporting the Archbishop in his praiseworthy efforts to provide for the needs of the Church, but you have chosen to actually oppose them, or at least to aplaud indifference. I do not know whether this violates the precept of the church that binds us to provide financial assistance to the church -- I assume you otherwise support the church financially -- but it comes close. The Archbishop has stepped out with courage and generosity in trying to encourage his flock to provide for seminarians, retired priests, and the education of children. How sad you find a way to see in his great efforts something sinister or base. I think you are badly misled.

We have differences of opinions and differnent experiences in our lives. Obviously.

I personally don't think asking for money for a questionable campaign for "future needs" of the Archdiocese, which have already been "paid" with the Archbishops Annual Appeal money, taken off the top of this Capital Campaign is "courageous" and "generous". It's confusing at best.

This is our money they are playing with. There are people who are for and giving directly to their church generously with providing repair, bills, new construction etc. With love.

Look into the education, teaching, hiring practices etc. of this Archdiocese and you'll see that someone is being midled, but it's not me.

Why don't they just teach people to tithe and be done with it.
5% to local parish, 5% to anything else.
We have been doing that for 34 1/2 years (since the wedding) so we don't need a cap.camp.

Excellent !! Thanks for your work.

EVIL is as evil does! They do not get a cent from us!

Your thoughts below are EXACTLY what I have thought. In fact, I talked to another good Catholic friend and she thought the same.
She doesn't give anything to the Archdiocese anymore, but straight to ministries she trusts.

I think they think they are SO SMART and we are just supposed to follow our 'shepherd'.

In fact, Carolyn, in one the 4 letter he (Archbishop) sent me said (paraphrasing with more, than less of the exact words) that I was not being faithful because I was not blindly following his shepherding.

From what I know there's a problem in this Archdiocese that show their lack of faithfulness to the Holy Father. Hmmm.

Thank you, Carolyn, for keeping us up to speed on the Archbishop's activities.
Do you happen to know if Archb. Vlazny will be retiring at age 75 or is he
going to stay on as Archbishop of Portland? Someone told me he was going to
continue as Archbishop here. I thought you might know what the scoop is.

Please look up this website. Canon Lawyer, Ed Peters is an advisor to Raymond Cardinal Burke.

I haven't heard any rumblings yet.

You'll have to copy and paste in the browser.

I happen to know the "ONE" priest our Archbishop distinguishes as choosing, with the full support of his parish council, to "oppose the idea of participating in the Campaign." That is accurate, but the Archbishop's statement that this priest opposes the GOALS of the Campaign is entirely wrong, and it's His Excellency who has the misunderstanding.

The priest in question opposes not the GOALS, but the METHODS of the Campaign, such as using the Mass as a "dog and pony show" for fundraising, EFT sign-ups, recordings and slick PR videos instead of homilies, disclosing private parishioner info to outside non-religious agencies, the heavy-handed sales techniques, and the ridiculously high money goals in one of the poorest regions of the Archdiocese. For this parish, it would equate to an average contribution of about $10,000 per parishioner among a congregation 90% retired on fixed incomes, many below the poverty line.

The priest in good conscience does not feel he can force this on his parishioner.

We have more than One priest who thinks we've fallen off the Holy Wagon.

This one you sited, isn't him. but he has holy boldness and is anonymous for intentional purposes. Isn't it sad that the priests who believe in the Church's teachings have to hide?