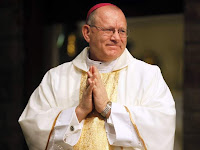 But I  really think that those in the pro-life movement will not be alone. I think  there'll be a chorus of voices that have never been heard in this world but are  heard beautifully and clearly in the next world -- and they will plead for  everyone who has been in this movement. They will say to God, 'Spare him,  because he loved us!'" Congressman Henry Hyde
Posted by VOCAL at 2:50 PM