Blessed Herman the Cripple, monk 1013 - 1054 is living proof why we value each life instead of the seeing it as a burden on our "environment". Roman Catholics are benefiting from this man, almost one thousand years later.

This year we start 40 Days for Life one day after his feast day, September 26th and ends on November 4th, two days from the elections. We believe each life has immeasurable value and we pray for leaders who see that value. Click on your area of Oregon for a 40 Days for Life near you. Portand Salem Beaverton Eugene McMinnville Klamath Falls St.Vincent dePaul - Portland Bend 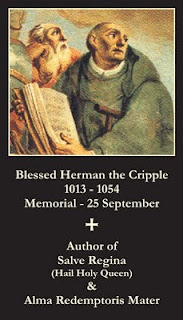 P.S. Thank you all for your prayers and loving me through this past year. Having just minimal depressions where I did feel alone, prayers did matter.
In a nutshell:
In November of 2011 I had a pacemaker put which happens sometimes after open heart surgery. December 2011 I had rotator cuff surgery because I HAD torn my shoulder muscles off in three place. I told them it hurt.
On Feb. 3rd. I was at the hospital when where my daughter was having a baby and was hit by a hugh laundry cart that couldn't see me because of a wide turn. My back has a fracture of the T-11 vertibrae and I had to fake it so my daughter wouldn't know I was hurt. She was doing such a great job. I just took more muscle relaxants that I had because my arm was in the sling because of my rotator cuff surgery. She never knew until a few days later, but I didn't hold my new grandson that day. Emotionally I was almost gone.

Thanks everyone for the kind words about thie blog. God Bless you and Blessed Herman and 40 Days for Life.

God bless you, Carolyn! What a year!! You certainly have a lot of suffering to 'offer up' ... and must be doing good to make the evil one give you so many painful distractions. In prayer

Thanks so much. There is sure enough "offering up" to choose from. It's interesting but I'm so much more aware of others suffering and how they cope. It is a good thing and a learning thing. It hurts, but not as much as some folks deal with. God Bless

I just found out about Blessed Herman the Cripple last year and put him on the Defend Life page. I love the poem!

He needs to be remembered.