The Pope with a Chotki 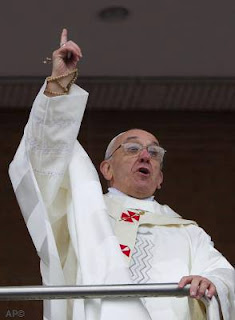 This striking photograph from WYD shows Pope Francis clearly wearing a chotki around his wrist—something I can’t recall seeing with any other pope.
What’a chotki?  It’s a kind of “prayer rope,” similar to the rosary, used by the Orthodox and Eastern rite Catholics.
From Wikipedia:


When praying, the user normally holds the prayer rope in the left hand, leaving the right hand free to make the Sign of the Cross. When not in use, the prayer rope is traditionally wrapped around the left wrist so that it continues to remind one to pray without ceasing. If this is impractical, it may be placed in the (left) pocket, but should not be hung around the neck or suspended from the belt. The reason for this is humility: one should not be ostentatious or conspicuous in displaying the prayer rope for others to see.


During their tonsure (religious profession),[4]Eastern Orthodox monks and nuns receive a prayer rope, with the words:
Accept, O brother (sister) (name), the sword of the Spirit which is the word of God (Ephesians 6:17) in the everlasting Jesus prayer by which you should have the name of the Lord in your soul, your thoughts, and your heart, saying always: “Lord Jesus Christ, Son of God, have mercy on me a sinner.”


Orthodoxy regards the prayer rope as the sword of the Spirit, because prayer which is heartfelt and inspired by the grace of the Holy Spirit is a weapon that defeats the Devil.


Among some Orthodox monastics (and occasionally other faithful), the canonical hours and preparation for Holy Communion may be replaced by praying the Jesus Prayer a specified number of times dependent on the service being replaced. In this way prayers can still be said even if the service books are for some reason unavailable or the person is not literate or otherwise unable to recite the service; the prayer rope becomes a very practical tool in such cases, simply for keeping count of the prayers said. However, among some monastics - hesychasts, for example – this replacement is the norm.


The history of the prayer rope goes back to the origins of Christian monasticism itself. When monks began going into the deserts of Egypt, it was their custom to pray the entire 150 Psalms every day. However, because some of the monks were unable to read, they would either have to memorize the psalms or perform other prayers and prostrations in their stead.


Thus the tradition of saying 150 (or more) Jesus Prayers every day began.
The western Rosary is sometimes said to have the same initial origin.


The invention of the prayer rope is attributed to Saint Pachomius in the fourth century as an aid for illiterate monks to accomplish a consistent number of prayers and prostrations in their cells.


Previously, monks would count their prayers by casting pebbles into a bowl, but this was cumbersome, and could not be easily carried about when outside the cell. The use of the rope made it possible to pray the Jesus Prayer unceasingly, whether inside the cell or out, in accordance with Saint Paul‘s injunction to “Pray without ceasing” (I Thessalonians 5:17).


It is said that the method of tying the prayer rope had its origins from the Father of Orthodox Monasticism, Saint Anthony the Great. He started by tying a leather rope with a simple knot for every time he prayed Kyrie Eleison (“Lord have Mercy”), but the Devil would come and untie the knots to throw off his count. He then devised a way—inspired by a vision he had of the Theotokos—of tying the knots so that the knots themselves would constantly make the sign of the cross. This is why prayer ropes today are still tied using knots that each contain seven little crosses being tied over and over. The Devil could not untie it because the Devil is vanquished by the Sign of the Cross.

Among other things, I think this shows the pontiff’s affinity for the Eastern rite churches. He used to regularly concelebrate the Divine Liturgy with Ukrainian Greek Catholics and this year took the historic step of having the Ecumenical Patriarch attend his papal installation—the first time that’s been done in a thousand years.

Thank you for this article.
Deacon Greg Kandra
Posted by VOCAL at 6:17 PM