Karl Rahner, Hans Kung and Joseph Cardinal Ratzinger all die on the same day, and go to meet St. Peter to know their fate.

St. Peter approaches the three of them, and tells them that he will interview each of them to discuss their views on various issues.

He then points at Rahner and says "Karl! In my office..." After 4 hours, the door opens, and Rahner comes stumbling out of St. Peter's office. He is highly distraught, and is mumbling things like "Oh God, that was the hardest thing I've ever done! How could I have been so wrong! So sorry...never knew..." He stumbles off into Heaven, a testament to the mercy of Our God. 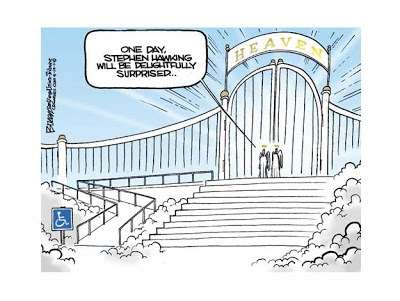 St. Peter follows him out, and sticks his finger in Kung's direction and "Hans! You're next..." After 8 hours, the door opens, and Kung comes out, barely able to stand. He is near collapse with weakness and a crushed spirit. He, too, is mumbling things like "Oh God, that was the hardest thing I've ever done! How could I have been so wrong! So sorry...never knew..." He stumbles off into Heaven, a testament to the mercy of Our God.

The pearly gates is an informal name for the gateway to Heaven according to some Christian denominations. It is inspired by the description of the New Jerusalem in Book of Revelation 21:21.
The twelve gates were twelve pearls, each gate being made from a single pearl.[1]

The image of the gates in popular culture is a set of large, white or wrought-iron gates in the clouds, guarded by Saint Peter (the keeper of the "keys to the kingdom"). Those not fit to enter heaven are denied entrance at the gates, and descend into Hell.[2]
Posted by VOCAL at 12:29 PM