Monday morning, Pope Francis made headlines by saying during an in flight press conference that he would not judge gay priests.  Portland's Catholic archbishop, the Most Rev. Alexander K. Sample, was out of town Monday and could not be reached for comment, according to Bud Bunce, a spokesman for the archdiocese. Sample is speaking at a canon law conference in La Crosse, Wis.

Bunce said Pope Francis' remarks should be viewed in context, and they do not represent a change in official Catholic teaching on homosexuality. 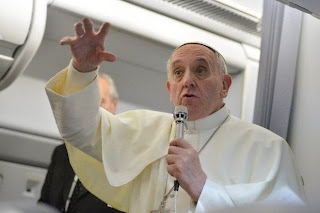 First, the context. Bunce said the pope was talking about a Vatican investigation of a monsignor that some had said "had a homosexual lifestyle." Francis said the investigation found no relevant evidence.
"That's how he gets up to the statement," Bunce says. Francis is quoted as saying, "If someone is gay and he searches for the Lord and has good will, who am I to judge?"

"That states the position the church has had for a long time," Bunce says. "It's nothing new."
Official Catholic teaching considers homosexual acts – not people – "intrinsically disordered" and holds that sexual activity between men and women should occur within marriage.

"The catechism of the Catholic Church says everyone should be treated with respect, that no one should be marginalized," Bunce said. "Essentially, that's what Pope Francis is saying."