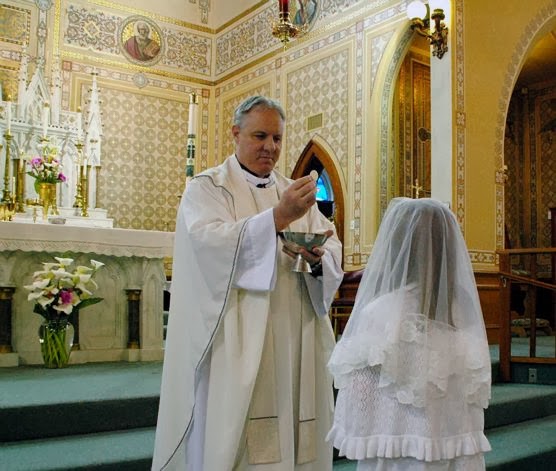 After the opening prayer and readings, Bishop Robert Vasa spoke to the congregation as he had done the night before during a vigil at St. Bernard Catholic Church.    ”Each time we gather, it seems that the grief becomes a little more manageable,” Vasa said. During his homily, Vasa said that the community would share the grief of Freed's “untimely death,” but said that his teachings would still remain.

”The torch is passed to all of you,” Vasa said. “Do not lose faith, do not lose hope. The examples and teachings Father Eric gave you, these too remain.”   As a way to begin after such a loss, Vasa told the congregation to utilize a characteristic that Freed exuded on a daily basis. 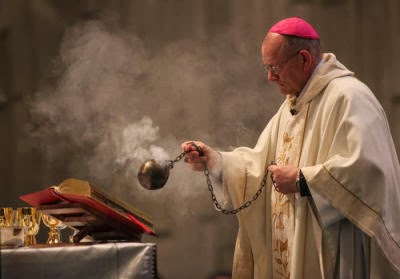 ”The commission here in Eureka is to love with the same joy that he possessed contagiously,” Vasa said.

Dance Farrell, who read scripture during the funeral Mass, said in an interview that Freed's joy in living was what brought everyone together.  "The one thing that he focused on more than anything else was the idea of joy,” Farrell said. “That joy that he brought is the reason all these people are here. Because he lived and shared that joy in a very real way.”

After the Mass ended, a funeral procession followed the hearse to St. Bernard's Cemetery. Mourners had the chance to say their final goodbyes -- some with a simple flower laid upon the casket while others fell to their knees and wept.   A reception was held after the burial where the many mourners were able to share their memories of Freed. 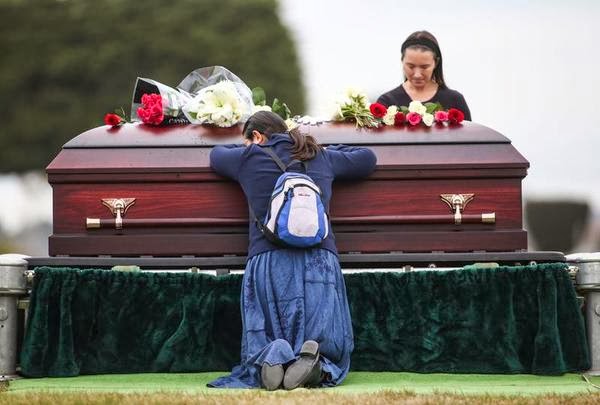 Maria Homen said she first met Freed in 2001 when he was administrator of St. Mary's Catholic Church in Arcata.  "He was a friendly, nice priest who was really nice to talk to” Homen said. “I'm really shocked that this happened to him.”   For Homen, Freed's ability to connect with his parishioners made a lasting impression on her.  "He was able to explain the sermons and their meaning very well,” she said. “And he was really good with kids.”

Arcata resident Diana Cavinta said Freed was very close to her family, even attending her daughter's second birthday.  "He was part of our family, our family life and religious life,” she said. “He was a wonderful person to everyone. It didn't matter if you were Catholic or a non-believer.”     Like Homen, Cavinta initially met Freed in Arcata and chose to follow him when he left to the Newman Center at Humboldt State University in 2006 and again when he moved to St. Bernard in Eureka. She even gave up her lunchtime jogs to go attend Freed's noon sermons.   Like many who knew Freed, Cavinta said she is having a difficult time coming to terms with his death.  "He sacrificed himself,” she said. “If he had to pick, instead of seeing someone else suffer, he would volunteer and take it. That's the only way I can justify it.”

Vasa told the congregation that their grief will eventually pass, which will give them the chance to live as Freed did.   ”Remember, rejoice, return,” Vasa said. “We must do that.”
Posted by VOCAL at 5:32 PM