Planned Parenthood VP Says Fetuses May Come Out Intact. More $$$ for them. 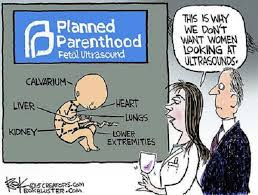 Planned Parenthood of the Rocky Mountains (PPRM) is a wealthy, multi-state Planned Parenthood affiliate that does over 10,000 abortions per year. PPRM has a contract to supply aborted fetal tissue to Colorado State University in Fort Collins.

In the video, actors posing as representatives from a human biologics company meet with Ginde at the abortion-clinic headquarters of PPRM in Denver to discuss a potential partnership to harvest fetal organs. When the actors request intact fetal specimens, Ginde reveals that in PPRM’s abortion practice, “Sometimes, if we get, if someone delivers before we get to see them for a procedure, then we are intact.”

Since PPRM does not use digoxin or other feticide in its 2nd trimester procedures, any intact deliveries before an abortion are potentially born-alive infants under federal law (1 USC 8).

“We’d have to do a little bit of training with the providers or something to make sure that they don’t crush” fetal organs during 2nd trimester abortions, says Ginde, brainstorming ways to ensure the abortion doctors at PPRM provide usable fetal organs.

When the buyers ask Ginde if “compensation could be specific to the specimen?” Ginde agrees, “Okay.” Later on in the abortion clinic’s pathological laboratory, standing over an aborted fetus, Ginde responds to the buyer’s suggestion of paying per body part harvested, rather than a standard flat fee for the entire case: “I think a per-item thing works a little better, just because we can see how much we can get out of it.”

The sale or purchase of human fetal tissue is a federal felony punishable by up to 10 years in prison or a fine of up to $500,000 (42 U.S.C. 289g-2). Federal law also requires that no alteration in the timing or method of abortion be done for the purposes of fetal tissue collection (42 U.S.C. 289g-1).
Ginde also suggests ways for Planned Parenthood to cover-up its criminal and public relations liability for the sale of aborted body parts.

“Putting it under ‘research’ gives us a little bit of an overhang over the whole thing,” Ginde remarks. “If you have someone in a really anti state who’s going to be doing this for you, they’re probably going to get caught.”

Ginde implies that PPRM’s lawyer, Kevin Paul, is helping the affiliate skirt under the fetal tissue law: “He’s got it figured out that he knows that even if, because we talked to him in the beginning, you know, we were like, ‘We don’t want to get called on,’ you know, ‘selling fetal parts across states.’”

The buyers ask, “And you feel confident that they’re building those layers?” to which Ginde replies, “I’m confident that our Legal will make sure we’re not put in that situation.”

Daleiden continues, “Planned Parenthood’s recent call for the NIH to convene an expert panel to ‘study’ fetal experimentation is absurd after suggestions from Planned Parenthood’s Dr. Ginde that ‘research’ can be used as a catch-all to cover-up baby parts sales. The biggest problem is bad actors like Planned Parenthood who hold themselves above the law in order to harvest and make money off of aborted fetal brains, hearts, and livers.”
Posted by VOCAL at 3:15 PM