Special Programming
A WOLF IN SHEEP'S CLOTHING
A look back on the life, ideals, and works of 1960s community activist, Saul Alinsky, through the lens of a Catholic perspective.
Saturday
10/01/2016
7:30 PM
01:30 hr. 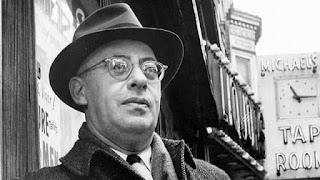 
A brilliant new EWTN film unmasks the man behind community organizing and what has greatly contributed to today's chaotic culture.

Do you want an understanding of where so much of society’s problems originated and how things went radically wrong in everything from culture to family life to politics?

You’ll find out from A Wolf in Sheep’s Clothing, set to air on EWTN television on Saturday evening, Sept. 24, at 6 pm Eastern time (check schedule for other time zones). (In Western Oregon Oct 1st. 7:30PM.)

The film is no less than riveting. By the brilliant team of Richard and Stephen Payne, the father-son filmmakers who head Arcadia Films, it explores the life and beliefs of one Saul Alinsky, often called the father of community organizing.

Act Three: “A good tree cannot bear bad fruit, nor can a rotten tree bear good fruit.” Here comes the assessment of the fruits which look ready for the trash heap. People at this point should be asking themselves, How did we get to this precipice and is there hope to back away

The film immediately grabs our attention with the tale of a wolf dressing as a sheep to mingle unnoticed with the sheep in the pasture. That sets the stage for the early years of Alinsky.
Period photos, headlines, and film bring to life the narration of Alinsky’s beginnings and growth in a fascinating way to get to understand the man. The Paynes blend these techniques in a way that keeps us moving closer to the edge of our seats as details pile up about his rise to unholy power.

Born in 1909 into an Orthodox Jewish family where the father was a successful middle class tailor, Alinsky became an agnostic and wanted to help the poor rise out of their condition. But how?
In college he took a social pathology course that, among other things, devalued marriage and family and ideas were constructed in Marxist terms.

As we get other examples, one of the experts briefly interviewed in the film says the organizing talk used was the language of peace and light, but all this was putting into place something different — a great evil coming in like a fog where people no longer see things distinctly. His idea to help the poor was good, but the means were evil.

The Paynes bring us some shattered news in the way we learn a number of Catholics thought Alinsky’s way was the way to go to help empower the poor. One was Msgr. John (Jack) Egan who became a close associate and prompted Alinsky to write what would be his last book, Rules for Radicals (which is linked to Marx).

In this fascinating film, the Paynes are cinematic investigative reporters showing us how after Alinsky died, the organization used its Marxist, socialist progress causes to influence every facet of American political power and culture. Alinsky organizing has vastly impacted our society’s culture, marriage, family life, morality and even spiritualty. Over 800 Alinsky organizations are spread throughout American communities today.

As one of his ardent followers stated, it’s guised under the name of liberalism instead of socialism. Alinsky was a major wolf, and there were others. The Paynes make the connection by detailing for us, with names and places and ideas all visualized, the three “hellfire movements of Marxism” that helped Alinsky and then affected Americans.

We’re shocked to learn about Frankfurt Socialism called Institute for Social Research in the USA, to change and bring down America by criticizing it, developing political correctness, the sexual revolution, and gender conflict and confusion; Gramsci Socialism targeting specifically the Catholic Church and transform America’s Judeo-Christian culture from the inside through law, media, entertainment, and family life, and limit religion only to private worship; Fabian Socialism to slowly break down the morals of the family in a stealthy, nearly imperceptible way.
Sound familiar when you look around?

The film helps us understand how these goals have affected our society, politics (some top politicians were Alinsky followers), media, entertainment, families, morality, culture and even, sadly, some inside our Church. We have to be aware of that. St. John Paul II called this culture of death.

The Paynes end as they began, with the story of a wolf — only this one ends differently.
Don’t miss this most timely film about the wolves in sheep’s clothing at this critical time in our country and world.