"Getting your 'Groove On' at the Adolescent Sexuality Conference in Seaside."

I've long wondered what, beyond immaturity or a naive sense of adventure, might inspire a teenager to submit a naked selfie to the wired universe.
Now, I know:  the Cascade AIDS Project. 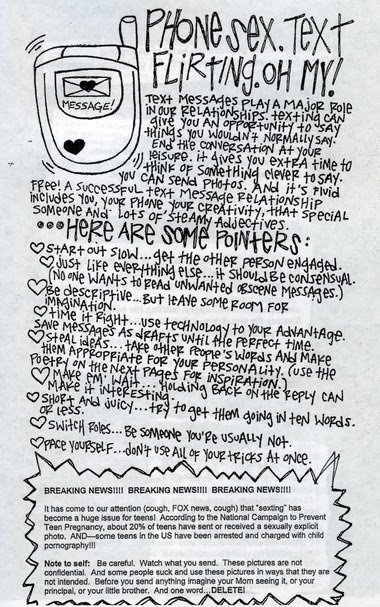 In recent years, CAP has arrived at the annual Adolescent Sexuality Conference in Seaside and distributed a 22-page pamphlet titled, "How to Get Your Groove on ... Fluid Free."

As CAP notes on the brochure's inside front cover, "We believe in the power of young people.  We believe you have the right to accurate, relevant information and sex and sexuality."

In that spirit, CAP offers "Neat Places to Make Out," a love-letter template ... and pointers on phone sex: "Texting can give you an opportunity to say things you wouldn't normally say.  End the conversation at your leisure.  It gives you extra time to think of something clever to say.  You can send photos.  And it's fluid free!"

True.  But as we saw in the events leading to a federal lawsuit at Clatskanie High School, sending photos may also leave teens vulnerable to bullying, extortion, public humiliation and physical abuse.

Oregon's Adolescent Sexuality Conference is a 20-year fixture in Seaside.
It is enthusiastically sponsored or supported by the Oregon Health Authority, the state's Department of Education, the Department of Human Services, and the Oregon Attorney General's Sexual Assault Task Force.

And Brad Victor, a recently retired sex-education specialist at DOE, estimates that up to 30 percent of last year's 300 attendees were middle-school or high-school students.


What should we make of Cascade AIDS Project offering adolescents pointers on phone sex, even encouraging teens to "send photos"?
VoteView Results

Peter Parisot, CAP's director of development and communications, said the pamphlet was published in 2009 "as part of ... our youth program for HIV prevention efforts.
"We operate in the real world," he notes. "Young people have sexual drives. We need to provide them with avenues to safety express their sexuality without running the risk of HIV transmission and HIV infections."

What's more, Parisot adds, the sexting page concludes with a reminder, "Be careful.  Watch what you send.  These pictures are not confidential.  And some people suck and use these pictures in ways that they are not intended.  Before you send anything imagine your Mom seeing it, or your principal or your little brother.  And one word ... DELETE!"

"What kind of advice is that," Welch asks, "to lie to your parents or do things behind their back?  If you saw me handing this out to your children on the street, I'd be picking myself up off the ground.  It doesn't belong in a state-sponsored, state-supported symposium that invites children as young as the seventh grade."

The weekend conference at the Seaside Convention Center includes keynote speakers Allison Vesterfelt ("A New Reason for Abstinence") and Cory Silverberg, a Canadian sexuality educator who founded the Toronto co-op sex store, Come As You Are.

Workshops include "Is It Rape? How Youth Make Sense of Unwanted Sex Involving Alcohol"; "My Mom Wishes I was a Lesbian: 'Coming Out' Experiences of (Bi)sexual Young Adults"; "Embracing Sexuality Education in Church"; and "Slut Shaming & the Value of Virginity."
And Nystrom isn't surprised by planned protests or the alarmed Facebook page.

"If we're going to support positive youth development, and sexual health across their life span, there are several key ingredients," Nystrom said.  "One of them is not to be afraid to dialogue with youth about subjects that sometimes make adults, even parents, uncomfortable.
"Making everyone happy or comfortable would be a challenge."

Understood.  But encouraging adolescents to get comfortable in the nude with their iPhone is, given the painfully relevant headlines out of Clatskanie, both irresponsible and mind-boggling.

As Nystrom and Victor wrote in a recent abstract, the state's approach to comprehensive sex education has evolved over the last 20 years from a teenage-pregnancy prevention program to one "that places young people at the center of their sexual health and well-being."

At the same time, conference organizers have made a "concerted effort," Victor says, to involve more youth in the presentations. Scholarships are offered, though students under 18 are required to bring a chaperone.

Welsh is troubled by that. "The event has degenerated into something it was never intended to be," he argues. "You're teaching my children what?  It's promoting ideas way out of the mainstream.  I know the mainstream has shifted over the years, but something is wrong here.  Why are my tax dollars being used for this?"

Nystrom -- who admits he has never seen the CAP brochure -- takes the critique in stride.
"Nowhere in the (sex ed) literature have I ever found that exposing kids to more sophisticated information encouraged sexual behavior or more sexual behavior," he says.  "When we equip kids with good accurate information, boy, they're making really good decisions. Pregnancy rates have been going down year after year.  "It would seem to me that the overall framework is working."

CAP remains unapologetic about its message.  "The whole point is how to avoid fluid exchanges," Parisot says.  "Our primary mission is to prevent HIV infections.  And the Legislature is mandating that we do a better job teaching adolescent and youth sexuality.

"The fact that a minority of the community is upset doesn't mean that this information shouldn't be put out there."

I get that. I get that a lot of teenagers need someone to talk to about sex, and parents aren't always available.

But I don't get, "Send photos." I don't get, "End the conversation at your leisure." Several teenage girls in Clatskanie surrendered a few such photos ... and they're wondering if the "conversation," or the abuse, will never end.

Dear Carolyn, thank you for this. We have parishioners praying the Rosary on the morning of the 7th to support those standing vigil in Seaside. I will send this out to all of them. God bless you.

Thank you and know that this will be passed on to those in Seaside.
The Rosary can work miracles and Jim Sedlak of STOPP who fights Planned Parenthood says that just a few concerned people make a difference.

With prayer warriors like your Church things have to change.
I'll keep you posted.

God Bless you all.