A bishop in Nigeria says praying the Rosary will defeat Boko Haram, following an alleged vision of Christ 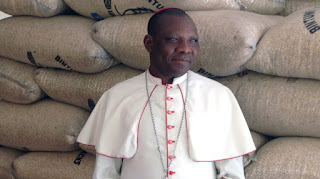 
Video courtesy of Catholic News Agency:
Bishop Oliver Dashe Doeme, head of the Diocese of Maiduguri in Nigeria's Borno State, was in a chapel praying before the Blessed Sacrament last December when, he says, something extraordinary happened: Jesus Christ appeared holding a sword, which He offered to the prelate.
According to Bishop Dashe, the moment he took the sword from Jesus' hands, it transformed into Rosary beads. He then heard Christ repeat three times, “Boko Haram is gone.”
The bishop recalls, “I didn't need any prophet to give me the explanation. It was clear that with the Rosary we would be able to expel Boko Haram.”
Boko Haram is the Islamic group that's been massacring Christian civilians in Nigeria and beyond for several years.

It originally was tied to Al Quaeda, but now formally pledges allegiance to the Islamic State of Iraq and Syria. Bishop Doeme says he's seen the size of his diocese cut in half since Boko Haram started ramping up its violent activity in 2009. Most fled for safer grounds.
“Despite all this,” the Nigerian prelate says, “we do not give up our public witness to our faith.” He affirms, “I wear my episcopal robes publicly, because on the day I agreed to be bishop I knew I was signing my death sentence.”
Boko Haram has reportedly been used in the recent past as a bargaining tool by the United States. Bishop Emmanuel Badejo of Oyo, Nigeria states, “The United States actually said it would help Nigeria with Boko Haram only if we modify our laws concerning homosexuality, family planning and birth control.”
Bishop Dashe also has problems with the West, which he notes isn't free of problems itself.

“In Europe and America you have your own demons: abortion, homosexual pseudo-marriage and secularism.”
The bishop hesitated in the beginning to tell anyone about the apparition, but soon began getting strong urges from the Holy Spirit to share its message. So he started to tell priests in his diocese what happened. Eventually, he announced it at a Catholic event in Spain supporting Christian victims of Islamic violence.
He's since gone on a “consolation tour” through diocesan communities, promoting prayer, forgiveness and persistent faith. He believes Jesus wants him to advocate praying the Rosary in order to assist them in these efforts.
“Maybe that’s why He did it,” Bishop Dashe remarks about the apparition.
“Our faith is unwavering,” he remarks. “Even when they suffer killings, Christians still go to church, and Christian activities in public life continue.”
Continuing, the bishop declares, “They can destroy our buildings and our lives, but they cannot destroy our faith in Christ.”

He expresses further confidence in the intercession of Blessed “Mamma Mary” toward instilling a peaceful recovery of his diocese.
His country's bishops have already jointly consecrated Nigeria to Our Lady in recent years.
“Boko Haram is evil, demonic, and can only be removed through prayer,” Bishop Dashe says.
Citing Jesus' words in the apparition, he insists that no matter how long it takes, with faith in the Most Holy Rosary, “Boko Haram is gone.”

Thank you sweetheart, for these.

Thanks Mary. This dear Bishop has really put his life on the line, but NOT his eternal one. "Hell is paved with the skull of rotten bishops" from St. John Chrysostom does not apply to him.