Lest we forget at least an over-the-shoulder acknowledgment to the very first radical: from all our legends, mythology, and history (and who is to know where mythology leaves off and history begins -- or which is which), the first radical known to man who rebelled against the establishment and did it so effectively that he at least won his own kingdom -- Lucifer. 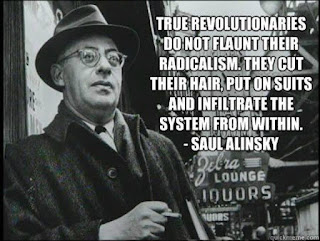 We are fortunate indeed to have a Catholic grassroots woman who, for decades, has kept a history of Saul Alinsky and his effect in our lives.  This woman's name is Stephanie Block from New Mexico.

In 2007, many Oregonians participated in three workshops that she and VOCAL presented in Portland, Salem and Bend: "Justice in Pieces".  You can still get a Powerpoint CD and handout that the members of the workshops received.  This is a free gift so send VOCAL your address and it will be sent right out.

The name Saul Alinsky has been tied to the Catholic Church since the beginning and we still keep this mindset alive by our ignorance and trust.  How can our Church leaders be so lost?  Catholics and Christian denominations generate massive amounts of money, but more importantly lead the faithful astray and in Oregon the Earth Charter is sometimes the focus instead of the Catechism. (VOCAL has more posts about this..just enter "Earth Charter" in the front of the blog for this and any other question".

The Rules for Radicals


Happy Thanksgiving to all of you...sorry this is a little late.

“I would maintain that thanks are the highest form of thought; and that gratitude is happiness doubled by wonder.”   G.K. Chesterton

"And whatever you do, whether in word or deed, do it all in the name of the Lord Jesus, giving thanks to God the Father through him."  Colossians 3:17
Posted by VOCAL at 7:46 PM

Hi,
I did get your email. Thanks.

but that quote is one I never heard. It bothers me a little. You

do know what Chesterton's wife said when asked who converted

her? She said, the devil. And in that she was a fabian I have always

wondered about her sense of humor and Hilaire Belloc was fabian too.

I believe they all met as fabians. I mean you aren't implying anything

about Chesterton with that quote, are you? Is there something we

I'll answer you this way, it's easier for me.


"I hate to say this as you might be a Chesterton fan and I am to
but that quote is one I never heard. It bothers me a little."


I interpret his quote as meaning that the Catholic Church was very comfortable and just like a "thick steak, glass of wine and good cigar". That would be his standard for comfort. It means to me that in his way of life's experience that would be so wonderful, like the Church.


"Do you know what Chesterton's wife said when asked who converted
her? She said, the devil."

Frances Chesterton said the the devil converted her because she actually came to believe in the devil and didn't want to spend Eternity with him, therefore, the devil did convert her.

"And in that she was a fabian I have always wondered about her sense of humor and Hilaire Belloc was fabian too. I believe they all met as fabians. I mean you aren't implying anything about Chesterton with that quote, are you? Is there something we don't know about Chesterton??? Just wondered."

I don't know where you got that information. Hilliare Belloc and Chesterton were not Fabians, they were Distributists far from being a Fabian. At a meeting with George Bernard Shaw, who was a Fabian, the newspapers described it as:

http://query.nytimes.com/gst/abstract.html?res=F1081EF83E5D13728DDDAA0894DA415B818DF1D3
Hot Debate between Chesteron and GB Shaw...humorous night. press the Ctrl key and + key to enlarge for better reading.

GK Chesterton was not a Fabian and almost single-handedly stopped the Eugenics movement long held as a beacon for the Fabian Society.

He is great..no problem with GK.

Does this get sent to all parish priests? After this last election, and we had more than one priest in our parish advocating against voting for Obama, that this would resonate with them. The word should be out there, because they sure do boost this organization.

Thanks for the support for VOCAL. I will send this to the priests in Western Oregon...and maybe Eastern now that I think of it.

Some have acted like they are being invaded by the enemy in the past.

We'll keep on keeping on.