"Human motherhood is two-fold in essence and is a more complex thing than motherhood among the animals.  There is, first, the physical act of giving birth, which women share with all of nature. As the tree bears fruit and the hen hatches her eggs, so every mother, by the act of birth is bound up with the life of all living things, and her of her may be rightly said, "Blessed is the fruit of thy womb."

But human motherhood has a second and far lordlier aspect - that of the spirit.  The soul of a child does not emanate from the mother's soul or body, but if freshly created by God Himself, Who infuses it into the body of the unborn child.

Physiological motherhood is glorified by this co-operation with God Himself, who fathered the baby's soul and then permitted a woman to clothe it in her flesh.  The human mother does not bear a mere animal but a man, made to the image and likeness of the God Who created him." 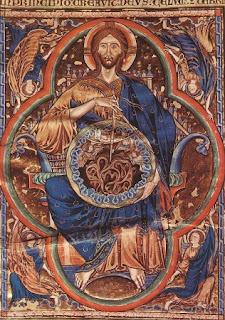 "Every birth requires a submission and a disciplining.  The earth itself must undergo harrowing before it passively accepts the seed.  In woman, the submission is not passive.  It is sacrificial, consciously creative, and for this selflessness her whole nature has been formed.

It is well known that women are capable of far more sustained sacrifice than men; a man may be a hero in a crisis, which enables a woman to be heroic through the years, months, days and even seconds of her life, when the very repetitive monotony of her tasks wears down the spirit.  Not only a woman's days but her nights--must share in the Calvary of Motherhood.

This is why women have a surer understanding of the doctrine of redemption than men have; they have come to associate the risk of life and death in childbirth, and to understand the sacrifice of self to another through the many months preceding it."

"And the co-operation with grace in a mother, although it may be unconscious on her part, yet makes her a partner of Divinity: every human mother is, in as sense, "over-shadowed by the Holy Ghost."

Not a priest, and yet endowed with a kind of priestly power, she, too, brings God to man, and man to God.  She brings God to man by accepting her mother's role, and thus permitting God to infuse a new soul in her body for it to bear.

She brings man to God in childbirth itself, when she allows herself to be used as an instrument by which another child of God is born into the world."

If motherhood is seen as a matter involving only a woman and a man, it is seen too astigmatically, and without the honor that it is due.  For to comprehend the real significance of motherhood, we must include the spiritual element that goes to make a child--we must see the human woman co-operating with her husband, the father of the human baby, and with God the Father of a soul that it eternal, indestructible and unlike any other ever formed throughout the history of the world.  Thus every human motherhood involves a partnership with the Divine"

The Way to Happiness by Fulton J. Sheen.

Happy Mothers Day Carolyn. God bless you and your daughters.

Thank you. I know this is years late, but the sentiment is true. God Bless you.