Someone to Grab Onto When Things Get Tough.

Here's a list of our Doctors of the Church   We are given them as a gift to us for all areas of our lives.  If we're ever in need let's remember them.  Then Trust.

There could be some of your confirmation saints among them.  Maybe someone you know will be confirmed soon.  This might help them.


Before the Pope can proclaim a person a Doctor they have to be a saint. It is a rare honor. Usually, it happens to a person who shows eminent (sound) holiness and a type of spirituality that is exceptional.

The Pope proclaims such a person because of overwhelming support by the entire church. This saintly person has a powerful message, example and contribution that will benefit the church members.

For that reason the Holy Father wants the whole church to know about this "extra-ordinary" and extraordinary person and proclaims the individual "Doctor" of the Church.

Next to the office of the Pope, the highest church office is a cardinal. Cardinals are selected by the Pope and only the cardinals elect a Pope. The Pope alone proclaims a Doctor.

The Thirty-five  Doctors of the Church 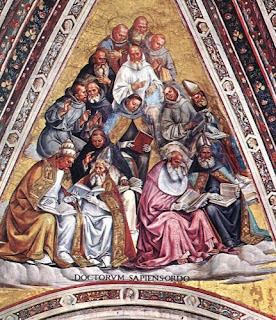 Original Four Doctors of the Eastern Church
recognized by St. Pius V in 1568


21.   Doctor of the Incarnation
St Cyril of Alexandria (376-444)
Patriarch. Opponent of Nestorianism. Made key contributions to Christology.
Added by Leo XIII in 1883

33.  Doctor of Confidence and Missionaries
St Therese of Lisieux (1873-97)
French Carmelite nun. Known as The Little Flower, "Story of a Soul" has become classic    inspiring millions to follow her "Little Way" of  holiness.
Added by John Paul II in 1997

These two Doctors of the Church were added by Pope Benedict XVI  to help us through the Year of Faith and bring us closer to who Christ meant us to be.  Let's remember that they are ready and able to help.

35.  Hildegard of Bingen
Benedictine nun during the height of the German Middle Ages, a true master of
theology and a great scholar of the natural sciences and of music.
Added by Benedict XVI in 2012

Thank you to Our Lady's Warriors from Catholic Media Coalition for your site.
Posted by VOCAL at 11:39 PM

Thank you Carolyn for all the work about the doctors of the church, etc. That was cool!

You're welcome. It truly was a labor of love and I didn't know so much about them either. The last two, John of Avila and Hildegard almost escaped me.