Archbishop Sample did something unprecedented by standing up for Religious liberty and visiting the Oregon State Capitol and welcomed by Senate Majority Leader Peter Courtney (D).   His presence was observed and inspired many that day. 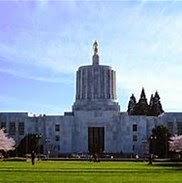 Senate Bill 894 would require religious employers to provide health insurance to cover abortions.  There were only two who spoke in opposition to SB894 at the public hearing, a lobbyist for Oregon Family Council and a concerned gentleman.  Although our "dog in the fight" said he was in the audience at the hearing, he wasn't observed on tape or by those in attendance (he could have been watching on a monitor, but remember he lobbies for other organizations too. Since he still hasn't publicaly stated he is against abortion when he voted to legalize it when a legislator in 1969.) He also said he did lobbying by phone, however those "in the know" differ in opinion.  We are left to wonder.

However, Archbishop Sample stood up for Oregonians himself and we are thankful for that.  There are four Democrat Senators who are also standing up for Oregonian's religious freedom and a great thanks go to them.  We are grateful and humbled.

Here is an article by Oregon Faith Report.

If Senate Bill 894 passes, religious employers would be required to provide health insurance covering abortions for their employees. The bill does not exempt religious employers from the requirements that health insurance plans cover women’s reproductive health care, including contraception, abortion, and preconception and postpartum care. The bill also limits cost-sharing for services and drugs used to terminate pregnancy. The coverage under a health benefit plan for services or drugs used to terminate a pregnancy may not impose a co-payment or coinsurance that exceeds 10 percent of the cost of the service or drug and may not be subject to a deductible.

The bill declares that restrictions on abortion coverage interfere with a woman’s right to make personal decisions regarding her own body and negatively impact her health and well-being. Restrictions also deny her constitutionally protected right to a safe and legal medical procedure.
Those opposed to the bill, like Oregon Family Council,  argue that it forces religious organizations to violate their consciences and set aside strongly held moral values. They believe SB 894 infringes on their religious freedom.

The bill has over 30 sponsors and has been passed on to the Senate health care committee.
You can read the full text of SB 894 here.
Posted by VOCAL at 6:13 PM

I assume by "dog in the fight" you are referring to our so-called lobbyist Roger Martin. God bless our good Archbishop Sample. But I still don't get why our church still has Roger Martin as our lobbyist for our diocese. When he was in the Legislature he publicly voted for two pro-abortion bills. It's in the legislative records. I think he should publicly apologize for those votes, after all, he publicly voted for them. If he does that then I'll support him in his job as lobbyist.

Thanks for telling us! I'm glad he went but he didn't publicly speak against the bill? Do we know why? Couldn't he have directed our lobbyist to speak out against it? I'm so confused! Oh well, I guess it's progress!

The lobbyist is supposed to be doing his/her job. We don't seem to have one that lives for the purpose of bringing a Catholic identity to the Legislature. This is especially disturbing because it is doom for our schools, churches and hospitals.

His presence to me shows he wants this Catholic identity to be known. I applaud him for acting when he probably knew that there were only two people against this bill and many, many for it.

We need a lobbyist with who speaks only for Catholics.

God Bless, I hope this helps.

Well hopefully our lackluster lobbyist will get replaced!!! Thanks for the updates!

What's SB 894? The Dems are set on attacking pregnancy resources centers in Cali, demanding they refer girls to abortion facilities.

SB894 is described in the post. It has since "died", however it can be "gutted and stuffed" into another bill and having waited until the sen of the session be passed. So it is something to watch. That's why we need a lobbyist that is right there addressing only the needs of Catholics.