"You have made us for yourself, O Lord, and our hearts are restless until they rest in you." - St. Augustine

The Vatican Press Office made an announcement this morning that has shocked the world: the Holy Father Pope Benedict XVI will resign at the end of February.
Clearly, the Church is entering waters now that are as perilous as they are unknown. Let us presume the best of our Holy Father's decision to resign, citing a lack of strength at 85 years old to carry out his papal duties.
Before commenting further, we believe further prayer and reflection are in order. This much is obvious, however--the wolves inside the Vatican and out have been circling our ageing pontiff ever since he was elected to Peter's chair. At the very beginning of his reign Benedict asked us to pray for him that he would not flee for fear of the wolves.
And now the whole world is confronted with a question that may never be answered, even by history itself: Is Pope Benedict resigning because the wolves all around him have achieved their diabolical objective, or has he found a way of circumventing their evil designs by removing himself from their gullets? We believe it to be the latter. Pope Benedict XVI will not allow the wolves to act in his name to the detriment of the Church any longer. Vatileaks alone has shown this to be more than a mere wild conspiracy theory. 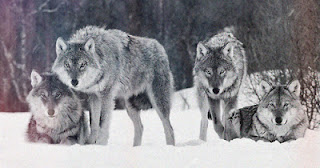 What now? Pray incessantly for a younger but still tradition-minded successor who will attempt to carry on the reforms Pope Benedict was quite obviously prevented from continuing.
May God help us all, and may He bless and protect his Church under siege from the world and in near total chaos internally. We pray for Pope Benedict, and ask our merciful God to watch over and protect him now and always.

We have been here before, and will be here again. 1295

In my heart of hearts I believe BXVI sees clearly the level of persecution that is coming with the growing evil in the world incl-- even esp-- here in the US. I believe he knows a stronger (physically)-- not better!-- warrior is required in this growing battle. And so he stepped aside. To quote the movie icon Dirty Harry: A man has to know his limitations. Our good and holy pope has humbly made it clear that he is not the warrior we need; let us pray the cardinals listen to the Spirit as has BXVI.

And pray that the Cardinals are extremely receptive of the Holy Spirit's guidance !

LOVE THIS. And putting dear Clint in the mix is great. It really ties things up. As I'm getting ready to go to a Bible Study, I turned on the TV to see if EWTN has anything on it regarding our dear Pope. "Just by chance" I saw a Protestant study called the "Victory in the End Times" with them having a series called Hearing from Heaven. Very interesting.

In our little microcosm in Oregon we are living it big time. We have to keep the 'wolves' away from our new Shepherd.

Thanks so much for your great email.