By DEREK MOORE
THE PRESS DEMOCRAT 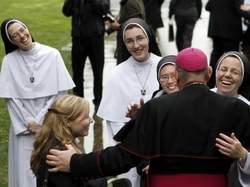 Vasa, who leads the 165,000-member Santa Rosa Diocese, said Benedict often spoke of a "hermeneutic of continuity," or a desire for there to not be a major disruption stemming from a change in leadership.

Benedict's papacy also was marked by clerical abuse scandals, the leaking of internal Vatican documents and disputes with other religious leaders and institutions. Vasa said he did not have "enough information to make any knowledgeable comments" about the abuse scandals.

Vasa said he was "very surprised" by Benedict's announcement to resign later this month, becoming the first pontiff in six centuries to do so.

Vasa predicted a muted reaction among the North Coast's Catholics. "I don't think there is any great grief or sadness. It's not like he is dying," Vasa said.

Worldwide, some Catholics have expressed shock that a pontiff is permitted under church law to resign what is billed as a lifetime post.

John Paul II, Benedict's beloved predecessor, continued to serve even as he coped with Parkinson's disease, in what some Catholics viewed as an uplifting testament to the religious tenet of suffering.
Vasa said Benedict "is of a different mind," and he said the pontiff decided he could serve the church as a "different type of witness."

"It has all the earmarks of a very prudent decision," Vasa said.