Pope is Blind in One Eye

Pope blesses thousands at Vatican as details of ailments emerge

VATICAN CITY -- A week after Pope Benedict announced his resignation, more than 50,000 supporters jammed into St. Peter’s Square on Sunday for his next-to-last weekly blessing, as it emerged the aging pontiff may have gone blind in one eye. 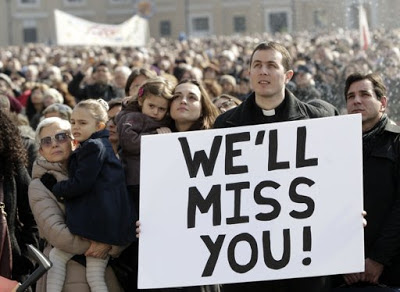 Addressing the cheering crowd, which was larger than usual for the Sunday Angelus, Benedict appeared to criticize the infighting that has plagued the Vatican during his reign.

“The church, which is mother and teacher, calls on all its members to renew their spirit, turn back firmly toward God and ignore pride and egoism to live in love,” he said, before asking in Spanish for prayers to be said for the next pope.

Benedict, 85, shocked the Vatican and the world Feb. 11 by announcing that he would step down at the end of the month due to failing health, although Vatican insiders have also cited a toll taken on the pope by power struggles behind the Vatican walls.

New evidence is emerging of Benedict’s declining physical condition. Peter Seewald, a German journalist who has interviewed Benedict on numerous occasions, said that when he last saw the pope 10 weeks ago, his hearing had deteriorated and he appeared to have gone blind in his left eye.

“His body had become so thin that the tailors had difficulty in keeping up with newly fitted clothes. ... I'd never seen him so exhausted-looking, so worn down,” he told Focus, a German magazine, on Saturday.

Seewald quoted the pope as saying: “I'm an old man and the strength is ebbing. I think what I've done is enough.” Asked if he was considering retiring, Benedict replied, "That depends on how much my physical strength will force me to that."

Supporters turning out to hear Benedict speak Sunday said the pope had come to recognize he was no longer able to carry out his duties. “It’s a human decision and I am here to pay my respects and say goodbye,” said Michaela Priori, 35, a Rome office worker.

Benedict will hold his last blessing in St. Peter’s next Sunday. That will be followed by a final general audience in the piazza Feb. 27, a day before he is flown by helicopter from the Vatican to the papal summer residence outside Rome to start his retirement. Two months later he is due to move into a former monastery in the Vatican’s large gardens when it has been refurbished.

The conclave at which cardinals elect the next pope is due 15 to 20 days after a pope dies, and an article in the apostolic constitution governing conclaves says that interval is also required if the pope resigns.

However, officials are now studying whether the date can be brought forward since no time is required for a papal funeral and the 117 cardinals due at the conclave are already making plans to travel to Rome. A speedier conclave would allow the next pope to be named before Easter